Political cards lined up for young, Black M.D.-J.D. from Charlottesville 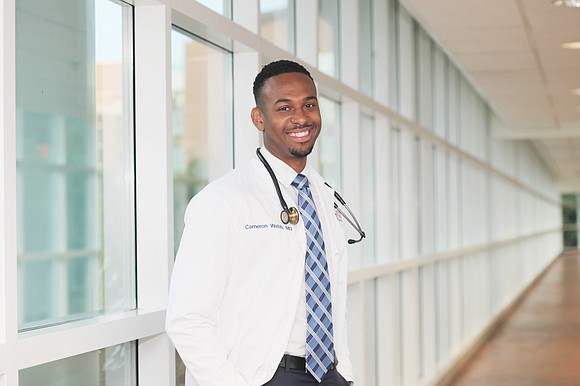 This time a year ago, Dr. Cameron Webb of Charlottesville had no idea he would be among the top contenders this fall for election to the U.S. House of Representatives.

The 37-year-old Democrat, a former White House Fellow and physician at the University of Virginia Health System who holds both a medical degree and a law degree, is running in Virginia’s 5th Congressional District centered in the Piedmont region.

The district, which encompasses an area with more square miles than the state of New Jersey, stretches for more than 200 miles from Fauquier County in Northern Virginia through 21 counties and the cities of Charlottesville and Danville to the North Carolina border.

At a time when public health policy is front and center on the national agenda along with unrest over police brutality and racial inequality, Dr. Webb is ready for the Nov. 3 political contest.

Squeezed in between his work as a hospitalist, including treating patients with COVID-19, and helping organize and conduct coronavirus mitigation efforts, Dr. Webb won a four-way Democratic primary election in late June.

He was a White House Fellow in 2016-17, serving on the health care policy team during the final months of the Obama administration and the first months of the Trump administration. He also worked on criminal justice reform, education and workforce issues through President Obama’s My Brother’s Keeper initiative.

That experience, he said, gave him valuable insight in “learning just how powerful the levers are.”

He said his compassion for people and his professional credentials have prepared him to serve as an effective advocate in Washington.

“I think it’s the right time to have a voice like mine in these conversations,” he said.

If elected, Dr. Webb would become the first Black physi- cian elected to the House of Representatives, according to the Congressional Research Service.

A native of Spotsylvania County, Dr. Webb earned his bach- elor’s degree from U.Va., his medical degree from Wake Forest University and his law degree and health law certificate from Loyola University in Chicago.

Following the fellowship, he and his wife, Leigh-Ann, an emergency services doctor, moved to Charlottesville where they joined the U.Va. medical school staff. In addition to his work as a hospitalist, he is an assistant professor of medicine and public health science and serves as director of health policy and equity, focusing on the needs of underserved and marginalized communities.

Dr. Webb recalled that he and his wife and two children arrived in Charlottesville a week after the August 2017 violent protests and tragic death of 32-year-old Heather Heyer, who was killed by an avowed white supremacist who drove his car into a crowd of counterprotesters during the neo-Nazi “Unite the Right” rally. The turmoil left many unsettled in the usually peaceful community.

If there were second thoughts about the decision to move to Charlottesville given the shattered peace, it did not prompt the couple to abandon course.

“It was a clarion call for us to do better and find a way to do true reconciliation,” Dr. Webb said.

He said he plans to bring his medical skills to the nation’s political operating room to work on health care, education, employment and climate issues.

“It’s up to me to show folks what I bring to the table,” said Dr. Webb. “I aim to be a healer in these spaces,” he said, add- ing that a growing number of emerging leaders want positive change in American society.

“When you have enough folks similarly minded, that’s when the magic happens,” he said, asserting he senses a growing push for health care for all, an improved criminal justice system and more work on ecology and the climate.

Dr. Webb’s service in the Charlottesville community quickly caught the eye of Dr. Wesley Bellamy, then vice mayor of Charlottesville and now interim chairman of the Department of Political Science and Public Administration at Virginia State University in Ettrick.

“He’s been very entrenched in the community,” said Dr. Bellamy, who is also a pre-law adviser at VSU. The two volunteered putting together COVID-19 testing for Charlottesville communities, Dr. Bellamy said. “He’s a unifier and energized different constituencies across the city.”

The upcoming election raises the possibility of Virginia gaining its third African-American member of Congress in the 11-member delegation. The two others, Rep. Robert C. “Bobby” Scott, who has represented the 3rd District Hampton Roads and Peninsula area since 1993, and 4th District Rep. A. Donald McEachin, who has represented Richmond, Petersburg and points south and east to Chesapeake since 2017, are running for re-election in November.

Dr. Bellamy said the 5th District race “will be a complex race, for sure.” Yet he echoes others in noting the political cards have stacked in Dr. Webb’s favor so far. In sweeping the June primary, Dr. Webb won approximately two-thirds of the 50,000 votes cast.

He now faces off with hard line conservative Republican Bob Good, a former athletics associate at Liberty University and a former member of the Campbell County Board of Supervisors. Mr. Good defeated incumbent Rep. Denver Riggleman in a two-way GOP nomination contest in June.

Dr. Webb said he has taken nothing for granted in this congressional contest, given its mixed political history and knowing it has not been represented by a Democrat in 10 years.

“We know a lot of people,” he said humbly, noting he has talked with hundreds of people by phone, at virtual political meetings and at occasional, but small in-person gatherings.

He said he and his team “will do what we can.”