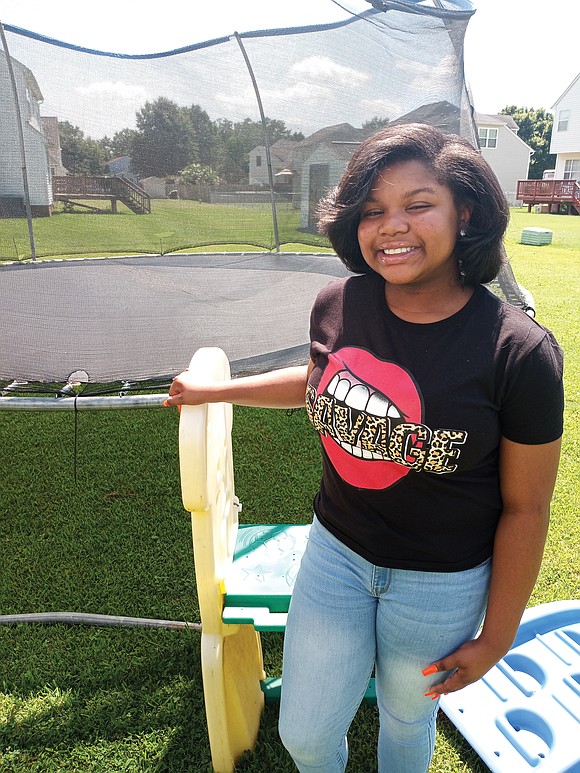 Chyna-Marie Johnson, a rising eighth-grader at John Rolfe Middle School, sometimes comes up with her anti-bullying raps while playing on the trampoline. Photo by Jeremy Lazarus

Adults forbid it and impose rules against it, but bullying continues to take place in schools.

One of every four students experiences bullying from other students at some point in their K-12 educational journey, according to government statistics, and much of it goes unreported, separate surveys find.

But one spunky 13-year-old is seeking to shine a spotlight on the topic with the rap songs she has created, including “Bullies Real Bad” and “The Bully Kid.”

Chyna-Marie Johnson, a rising eighth-grader at John Rolfe Middle School in Henrico County, has brought her anti-bullying message to various back-to-school, National Night Out and school opening events in the Richmond area.

This week, she performed at the city’s new River City Middle School at rallies for sixth-, seventh- and eighth-graders who will be attending the school on Hull Street Road. And her manager mother, Kwe Johnson, said Chyna-Marie is scheduled to appear at the school’s public grand opening in September.

“It’s like a horror movie,” the teen raps in “Bullies Real Bad.” “Yeah, Yeah, I’m not really with these bullies.”

Her words stem from her own experience at John Rolfe, though she doesn’t like talking about the incidents.

Ms. Johnson said that her daughter was twice assaulted without provocation at the school during her sixth-grade year. A boy punched her in class because she helped her girls’ team win a contest over a boys’ team, Ms. Johnson said. Later, another girl just wanted to fight her and did when Chyna-Marie tried to walk away, Ms. Johnson said.

In both cases, Chyna-Marie was suspended for fighting back, her mother said.

“You aren’t allowed to defend yourself,” her mother said. “Anyone involved in a fight gets punished.”

Chyna-Marie’s raps do not address the way adults handle such situations. Instead, she focuses on the impact of bullying and seeks to address students who are doing the bullying to encourage them to change.

“All of you bullies are not scary,” she wrote in “The Bully Kid,” “even though you think you is. I don’t know who told you this. You want to be the bigger kid. The education and conversation will make you better ...”

Chyna-Marie said she enjoys performing. “I’m happy that people want to hear what I have to say,” she said.

For her, the real reward has been the response from younger audience members who come up to her after she leaves the stage, Ms. Johnson said.

“They want to give her a hug or tell her how much her words meant to them,” she said. “They have been bullied and haven’t been able to talk about it and want to thank her for raps that reflect their own feelings.”

Ms. Johnson said she is proud of her daughter for speaking up on a topic that she said too often is a fact of educational life for young people. For them, the turn to virtual school last year provided relief from the verbal and physical harassment that was taking place in school.

In Ms. Johnson’s view, adults in positions of authority too often turn a blind eye to what is happening to children, or blame the victim as well as the instigator.

Chyna-Marie turned to music for solace after her father died when she was in grade school. She started strumming a guitar and suddenly found herself brimming with ideas for songs and raps.

She is grateful the words she composed are reaching a wider audience.

“I hope what I am doing will help,” she said.