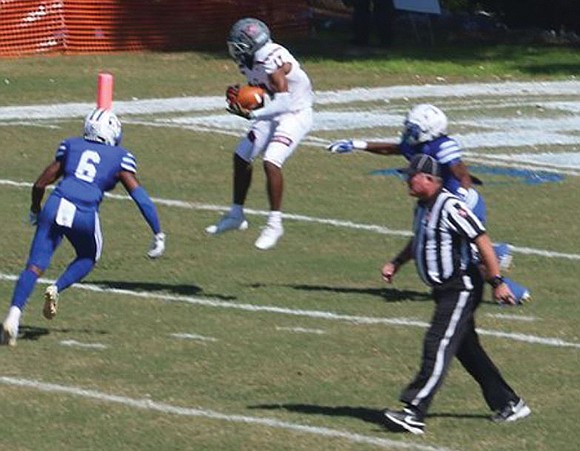 Fully awakened after a slumbering start to the season, the Panthers have no time to celebrate their rousing 38-31 victory last Saturday at Chowan University.

On deck is a pivotal match against perennial CIAA Northern Division heavyweight Bowie State University. Kickoff in that matchup is set for 1 p.m. this Saturday, Oct. 23, at Hovey Stadium.

This Saturday’s tug-o-war for the top rung in the CIAA Northern Division also will serve as the annual Lucille Brown Community Youth Bowl and Military Appreciation Day.

At least offensively, the Panthers hit their stride, and then some, against Chowan, racking up 552 yards total offense with 363 rushing.

Byers, the hard-to-wrap-up 5-foot-7, 171-pound newcomer with the shifty hips, wasn’t to be upstaged. The game marked the New Jersey native’s second 200-yard-plus explosion in just his seventh game wearing the maroon and steel. Earlier, Byers rolled for 210 yards against Virginia University of Lynchburg.

Shifting into Week 8, Byers leads the CIAA in rushing with 654 yards, seven touchdowns and 5.8 yards per carry average. Defeating Chowan, a team that’s usually at the middle of the pack, is one thing. Nudging Bowie State off its customary pedestal will require more elbow grease.

VUU Coach Alvin Parker designed the ideal game plan against Chowan and will need more of the same against the invading Bowie State Bulldogs.

Bowie State is led by quarterback Ja’rome Johnson who has passed for 1,393 yards and 17 touchdowns while connecting on 59 percent of his aerials.

A transfer from the University of Virginia at Wise, Johnson was CIAA Offensive Player of the Year in 2019.

VUU’s quarterback situation is more dicey. Graduate student Khalid Morris has enjoyed a solid season, but gave way to E’Mond Caldwell for much of the second half against Chowan.

Caldwell, also a graduate student, hit eight of 14 passes for 149 yards and a touchdown, and ran four times for 26 yards.

VUU’s defensive leaders against Chowan were safety Marquis Hamilton, with seven tackles, and Xzavier Hines, aka “The X Factor,” with three tackles and three quarterback hurries.

The relentless Hines, among others, kept Chowan quarterback Bryce Witt on the run most of the afternoon.

Should VUU upset Bowie State and follow up with victories against Elizabeth City State University on Oct. 30 and Virginia State University on Nov. 6, the Panthers would likely claim the Northern Division title and travel to Salem for the CIAA championship on Nov. 13.

The Panthers, despite some close calls, have yet to earn a trip to Salem, site of the CIAA championship game since 2016. That’s generally because big, bad barking Bowie State is standing in the way.