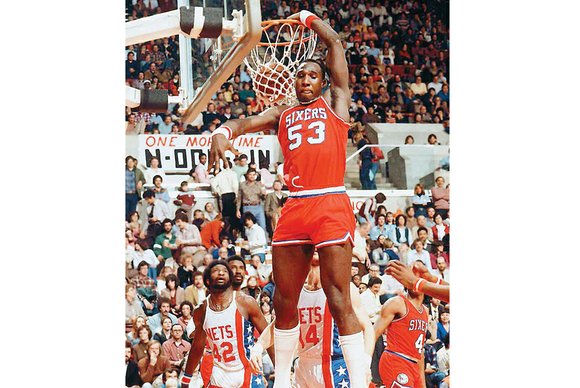 Darryl Dawkins, aka “Chocolate Thunder,” slams home a dunk for the Philadelphia 76ers in a 1980 game against the New Jersey Nets. Photo by Manny Millan

Darryl Dawkins was a mountain of a man with a persona to match.

To the delight of fans and the media, he shattered backboards, gave poetic names to his power dunks, sparked the invention of the breakaway rim and made NBA history at 18 by challenging and defeating the system.

Mr. Dawkins, who grew up dirt poor in Orlando, Fla., died on Thursday, Aug. 27, 2015, in Allentown, Pa., where he lived with wife, Janice, and their three children.

His death at age 58 was attributed to a heart attack.

There likely never will be another quite like Mr. Dawkins. Everything about him seemed larger than life, starting with his 6-foot-11 frame, broad-as-a-barn-door shoulders, and his nickname ,“Chocolate Thunder.”

He often made comic and outrageous statements to reporters, such as the time he said he was “an alien from Planet Lovetron” and engaged in “interplanetary funkmanship.”

Then there were his signature dunks awarded names like “Rim Wrecker,” “Go-Rilla,” “Look out Below,” “In yo face disgrace” and “Spine Chiller Supreme.”

Playing for the Philadelphia 76ers against the Kansas City Kings, Mr. Dawkins dunked with such force that the Plexiglas backboard disintegrated and came crashing down.

“I was scared, thinking it was coming down on me … I ran like a scalded cat,” he told the press afterward. Then he thought about it overnight.

The next day, he provided a handwritten statement to the media with this title for his iconic slam:

Bill Robinzine was KC’s center at the time.

Only a mummy couldn’t smile at the description.

Soon after that, the breakaway rim was introduced.

Mr. Dawkins played in the NBA from 1975 to 1989, finishing with 8,733 points. It would have been more if statisticians could award extra credit for “style points.”

While he played in 10 playoffs and was on three finals teams, Mr. Dawkins won his only championship ring with the Detroit Pistons in his final season, 1989.

Much more is remembered about his first season with the Philadelphia 76ers in 1975.

After leading Maynard Evans High School to the Florida state title, Mr. Dawkins decided college was not for him and submitted his name for the NBA draft.

He became the first to go directly from high school to the NBA, coining the term “from prep to pro.”

At the time, the NBA had a rule that players must be four years removed from high school to enter the draft, requiring virtually all would-be players to come from a college team.

For once in his life, his childhood poverty proved a blessing. The NBA made an exception for Mr. Dawkins based on “financial hardship.”

The NBA rule already had begun to crumble because of two men in somewhat different circumstances.

In 1970, Spencer Haywood made history by skirting the four-year rule and hopping from the American Basketball Association to the NBA.

The move was hotly contested, but the athlete won when his case, Haywood v. NBA went to the U.S. Supreme Court, which ruled 7-2 in his favor.

Then in 1974, Petersburg High School’s Moses Malone bypassed college and went straight to the old ABA Utah Stars. The ABA had no rules about early entry.

The NBA didn’t relish losing such potential star attractions to the upstart ABA, and the next year, when Mr. Dawkins was available, created the hardship exception. Mr. Dawkins was taken by the 76ers as the fifth player drafted overall in 1975.

He got his nickname from singer Stevie Wonder, who attended a Sixers game with a friend. During the game, Mr. Wonder’s friend referred to Mr. Dawkins as “Chocolate Man.”

Mr. Wonder came up with “Thunder” by simply hearing and feeling the force of the dunks and crowd reaction.

He pieced it together and the one and only “Chocolate Thunder” was born.

“Darryl touched the hearts and spirits of so many with his big smile and personality and ferocious dunks,” Mrs. Dawkins noted in a statement she released after his death, “but more than anything with his huge loving heart.”