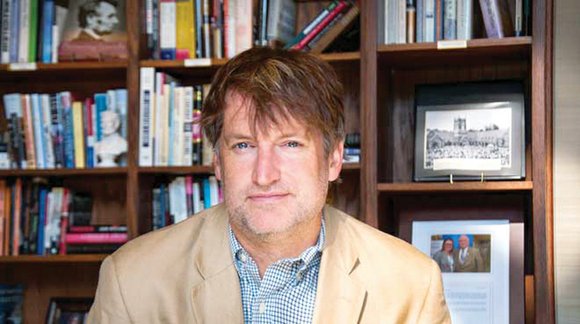 The city is looking for a new director to lead its anti-poverty effort through the city Office of Community Wealth Building.

Thad Williamson announced he is resigning as the director to return to his position as associate professor of leadership studies at the University of Richmond.

Dr. Williamson, 46, told the Free Press Wednesday his last day on the job will be May 27.

“The university has been very supportive of me taking professional leave at this unusual time because they recognized this was an opportunity to do something of great significance in the community,” Dr. Williamson said.

“I feel like I have used my abilities to take it this far,” he added. “It’s been my privilege to work with Mayor Jones and his administration to help get this thing rolling. It’s probably time for someone who’s able to make that long-term commitment to drive this thing forward and make a significant community impact.”

Richmond Mayor Dwight C. Jones named Dr. Williamson to the post in June 2014 to lead the new office that he tasked with coordinating the city’s poverty reduction and wealth building initiatives.

The office was formed at the recommendation of an anti-poverty commission that Mayor Jones appointed in January 2013. Dr. Williamson and then-City Council Vice President Ellen F. Robertson co-chaired the commission. Its 50 community members were to come up with proposals to aid Richmond, where one in four residents lives at or below the poverty level.

In December, Dr. Williamson said, a city ordinance moved the Center for Workforce Innovation, which focuses on job training, under the Office of Community Wealth Building umbrella, adding eight more full-time employees to the agency.

As he nears the end of his term, Mayor Jones has asked for about $1.2 million in his budget proposal for fiscal year 2017 to fund the agency.

He praised Dr. Williamson’s efforts in leading the anti-poverty initiative in its infant stages.

“Thad’s leadership has been the glue that has pulled together my vision for a comprehensive approach to mitigating poverty in the city of Richmond,” the mayor said in a statement to the Free Press.

“I could not be more pleased with the work we have accomplished together and the direction that we’ve set for the continued work needed to reduce poverty in the city,” he added.

Dr. Williamson said he’s proud of the partnerships the agency has developed with Richmond Public Schools, Richmond Redevelopment and Housing Authority and other groups to help the needy.

He cited initiatives that his office has helped spearhead such as the BLISS, or Building Lives to Independence and Self-Sufficiency, program that connects families in public housing to jobs, wraparound services and more permanent housing. He also mentioned the RVA Future Career and College Asset Centers at the city’s public high schools that help connect students to college and career opportunities.

Dr. Williamson said, ultimately, the city would have to provide more funding and resources to reach its goal of reducing poverty by 40 percent overall and 50 percent for children over the next 15 years.

“I hope this is something people in Richmond are proud of,” he said of his office’s efforts to find solutions to poverty. “We’ve gotten some recognition for our efforts, but everyone has to understand that tackling poverty over the long haul does not have one simple solution.”