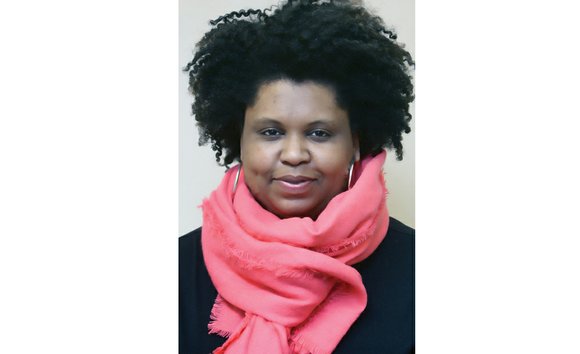 Enjoli Moon first contemplated the idea of starting the Afrikana Independent Film Festival in 2014. “I was planning to attend black film festivals in other areas and began to wonder why Richmond didn’t have one,” the Richmond native recalls.

From there, she says, “I started playing around with ideas and initially thought of pitching it to an organization or institution. But a friend encouraged me to do it myself, and said they were willing to support the festival as a sponsor.” Buoyed by the proposition, Ms. Moon is organizing the first multiday Afrikana Independent Film Festival that tentatively is scheduled for this fall.

She describes the festival as a vehicle to showcase the cinematic works of emerging and established filmmakers throughout the African Diaspora.

“Our platform,” she says, “is designed to celebrate the global black culture through the medium of independent film, created by and about black people.”

Ms. Moon launched the endeavor by creating the Noir Cinema monthly film series “as a way to introduce Afrikana to the city.” It showcases short, independent films on the third Thursday of each month at different Richmond area art galleries.

Ms. Moon says the first Noir Cinema screening was held in Richmond in September 2014 at the Page Bond Gallery in the Fan District, with the filmmaker in attendance.

Next on tap for Noir Cinema is the Richmond premiere of “Black Card” by director Pete Chatom at 7 p.m. Thursday, Feb.18, at Browne Studio, 1100 Hull St. in South Side. The film examines how far the boundaries can be pushed for an African-American couple in a culture requiring an ID card and commitment to the codebook, according to a post on the film’s Facebook page.

Ms. Sanchez, 81, will participate in an audience discussion about her life and work after a screening of the documentary “BaddDDD Sonia Sanchez.”

The event, which had been postponed because of inclement weather, will take place at the Grace Street Theatre, 934 W. Grace St.

Ms. Sanchez emerged as a seminal figure in the 1960s Black Arts Movement, raising her voice in the name of black culture, civil rights, women’s liberation and peace as a poet, teacher, activist and early champion of the spoken word.

“We will also host our next ‘Movies & Mimosas’ on Sunday, April 3, with our community partner, Feast RVA,” Ms. Moon said. More information on the film group and its events is available at www.afrikanafilmfestival.org.

This week’s Personality, Enjoli Moon, is a film visionary:

The Afrikana Film festival is unique because: We work to present stories that authentically reflect the full spectrum of black culture. We highlight the beauty and uniqueness of Richmond through hosting events at different arts and culture venues throughout the city.

My vision for the festival:  To make the Afrikana Film Festival a destination event for the city of Richmond. Multicultural, independent filmmaking is growing exponentially and we are certain that Richmond and film lovers across the region are eager for an upbeat, creative, intelligent, welcoming space to celebrate art. We’re also excited about continuing to grow our year-round events such as Noir Cinema, Evening with an Icon and Movies & Mimosas.

How the festival is funded: Through the support of our sponsors and generous community contributors. We accept donations at our events as well as on our website.

How I will feel when it’s over: Happy. Relieved. Tired!

To become a volunteer: We love our volunteers! You can become an Afrikana Ambassador by filling out the info form on our website or emailing info@afrikanafilmfestival.org.

Favorite independent film and why: “Eve’s Bayou.” This film was Kasi Lemmons’ directorial debut. She had a $4 million budget — small potatoes in the movie world — and expertly executed every aspect of this film. She also wrote the script and created complex, well-developed characters with an engaging storyline. On top of that, she amassed a top-notch cast and released one of the most financially and critically successful indie films of 1998. In short, she sprinkled her #BlackGirlMagic all over it!

Favorite independent filmmakers and why: That’s tough, but I’m going to have to go with Ava DuVernay and Darius Clark Monroe. While they have distinctly different styles, they both have shown an ability to highlight the beauty of humanity, especially that of black people. They create films that touch the most honest parts of people.

How I start the day: From a place of gratitude. Being mindful of how blessed I am helps to push me through the “to-do” lists of the day.

What it takes to attract filmmakers to Virginia: It requires a variety of things like incentive programs for production companies and large pools of qualified workers and other talent to help create the films. It also requires people viewing Richmond as a place where people appreciate film. Also, just putting Richmond on the radar, which is happening. That is the importance of film festivals. It creates a platform that expands people’s cinematic acumen while introducing established and upcoming filmmakers to all of the beauty of our city and state.

A perfect day: Sitting on the patio of a local coffee shop digging for films. There is so much content out there and I enjoy sifting through it all to find something I know fits in with Afrikana.

A perfect evening: Chilling with my son. He’s a pretty funny and interesting person, so an evening with him is always a good time.

I place top value on: Family, especially making sure my son is able to explore his dreams.

When I look in the mirror, I see:  A person learning to love and forgive all parts of herself.

Person who influenced me the most: In my adult life, I would have to say Neverett Eggleston III, owner of Croaker’s Spot. I was under his tutelage from the ages of 20 to 30 and he really grew my understanding of the importance of black entrepreneurship and creativity. Along with my parents, he has been pivotal in my development as an individual and entrepreneur.

Book that influenced me the most: “Eat That Frog” by Brian Tracy. The tools he provides have helped to defeat the procrastinator in me.

What I’m reading now: “The Sisters are Alright: Changing the Broken Narrative of Black Women in America” by Tamara Winfrey Harris and “Between the World and Me” by Ta-Nehisi Coates (audio book).

My next goal: To launch our annual multiday festival, making it a destination event for our city. Additionally, I look forward to Afrikana continuing to create programs that engage not only the Richmond community but the entire region in the world of black indie film.