Help in the wings for Evergreen, East End cemeteries 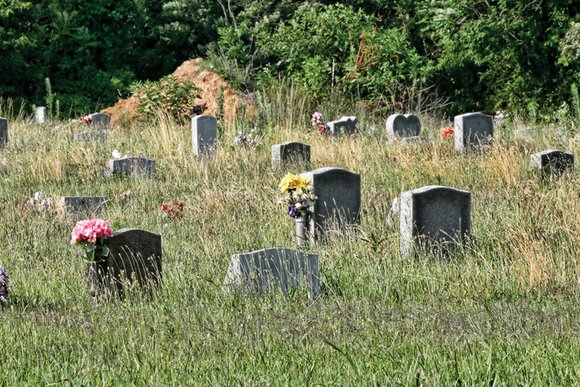 Two historic, but neglected cemeteries where renowned African-Americans such as Maggie L. Walker and John Mitchell Jr. are buried may get a huge boost from the state.

The Virginia Outdoors Foundation (VOF), a state nonprofit set up 50 years ago to preserve open land in Virginia, is poised to set aside $400,000 for a future grant to protect and care for the Evergreen and East End cemeteries.

“This is wonderful,” said Marvin Harris, a real estate agent who has led the effort of the Maggie L. Walker High School Class of 1967 to remove vegetation and improve the cemeteries ahead of the class’s 50th reunion celebration.

He said that he recently learned from VOF Executive Director Brett C. Glymph about the foundation’s interest in assisting with the restoration.

“I was blown away when I learned they might put up $400,000. That would go a long way to achieving success.”

The two privately owned burial grounds are located north of the city’s Oakwood Cemetery, between Nine Mile Road and East Richmond Road. Combined, the adjoining cemeteries cover 76 acres along the boundary between Richmond and Henrico County. The cemeteries date to 1891 and contain more than 9,300 documented graves.

They also are adjacent to two unused and equally neglected city-owned cemeteries, Oakwood Colored Cemetery and Colored Paupers Cemetery, where African-Americans were once buried.

The VOF board is to meet Thursday, June 30, at Capital Square to vote on the nascent proposal, which has the endorsement of Gov. Terry McAuliffe.

This would be the second time the state has stepped in to support the preservation of an African-American burial ground. During his tenure, Gov. Bob McDonnell made a gift to the city of a state-owned property in Shockoe Bottom that some believed to be a former 18th-century slave burial ground, but which had long been used as a parking lot.

The Maggie Walker Class is among a host of individuals and groups that have been involved for years in efforts to clean up and restore Evergreen and East End cemeteries.

Among the thousand of burial sites are the graves of Mrs. Walker, the first African-American woman in the nation to establish and operate a bank, and Mr. Mitchell, the crusading editor of the Richmond Planet, who was a banker, businessman and outspoken city councilman.

Near them is the grave of the Rev. John Andrew Bowler, an educator who organized George Mason School and founded Mt. Olivet Baptist Church.

VOF’s involvement to preserve and protect Evergreen and East End is in its infancy, according to foundation spokesman Jason McGarvey.

If the board does agree, as expected, to set aside the money, “that is simply the first step and just ensures that funds will be available if this moves forward,” Mr. McGarvey said. “There are still a lot of details to work out internally and with partners” before the funds could be awarded.

The goal, according to the paperwork sent to the VOF board, is to ensure “permanent protection for the properties and enable restoration efforts to continue with funds and certainty.”

Ahead, the foundation would seek to find a partner such as the city’s charity arm, the Enrichmond Foundation, which could untangle the title to the property and seek to take ownership of the two cemeteries.

The VOF would then seek to create a conservation easement for the property and to have the partner or partners create a plan for “the care and the use of the properties that respects the history and benefits the community.”

The project ultimately could encompass the two city-owned cemeteries.

The VOF effort would fit with its mission “to preserve the natural, scenic, historic, scientific, open-space and recreational areas of the Commonwealth.”

Since its founding in 1966, the foundation has secured conservation easements on 750,000 acres of land, often farmland that owners do not want to see developed.