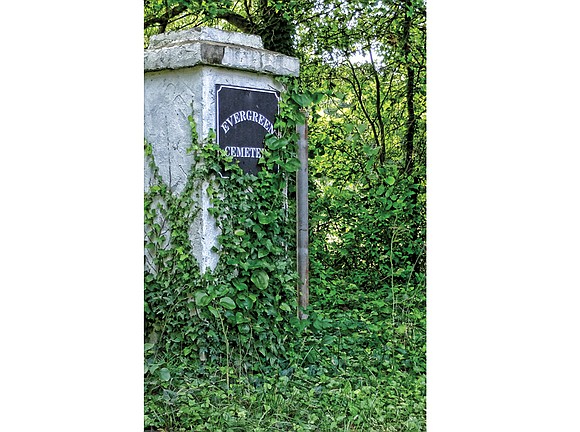 Mr. Harris initially took on the cemetery improvement as a member of the Maggie L. Walker High School Class of 1967, which held its 50th reunion during the summer.

Now fully hooked on the restoration effort, Mr. Harris has created the nonprofit Evergreen Restoration Foundation to continue improvement work at the 126-year-old private cemetery located just north of the city’s Oakwood Cemetery off Nine Mile Road on the border with Henrico County.

Mr. Harris said the new owner of the burial ground, The Enrichmond Foundation, the city’s charity arm, is allowing the Restoration Foundation to adopt the section where Mrs. Walker, Mr. Mitchell and hundreds of other well-known and ordinary Richmonders are buried.

“We’re going to need the same commitment and help to maintain and fully restore this 15-acre area to its original state,” Mr. Harris said.

That includes people willing to help with the work and those willing to donate to the Restoration Foundation to purchase tools and hire professional landscapers, he said.

Since the Walker alumni got involved, “we have had at least 400 volunteers take part,” Mr. Harris said.

On Nov. 4, 91 people, mostly from Hunton & Williams law firm, turned out to reclaim graves and remove the weeds “that continue to attack,” he said.

“But my observation,” he continued, “is that it will take much more manpower and dollars to correct the neglect inflicted upon this cemetery.”

He said the Restoration Foundation’s goal is to raise $30,000 during the next two months to pay for removing trees and brush that are currently dormant.

The Restoration Foundation’s efforts are focused on about 25 percent of the 60-acre cemetery.

John Sydnor, executive director of Enrichmond, said restoring Evergreen “as a safe, scenic and public place” will require the efforts of groups like the Restoration Foundation, churches, individuals and others.

For example, he noted that Dominion Energy recently contributed $100,000 to support Evergreen’s restoration.

Originally opened in 1891 to be the African-American version of Hollywood Cemetery, Evergreen Cemetery contains about 5,000 graves. Families were not required to pay into a perpetual care fund to pay for upkeep at the cemetery, which has become overgrown.

Evergreen is the oldest and largest of a complex of four African-American cemeteries, including private East End Cemetery that has been abandoned for decades, and two that the city owns that were operated during segregation but are no longer tended, Oakwood Colored and the Colored Paupers cemeteries.

The Enrichmond Foundation, with the financial support of the Virginia Outdoors Foundation, bought Evergreen in May from UK Corp., a company owned by Isaiah Entzminger of Richmond.

For information about the Evergreen Restoration Foundation, contact Mr. Harris at (804) 240-1418 or go to www.evergreencemeteryfund.com.