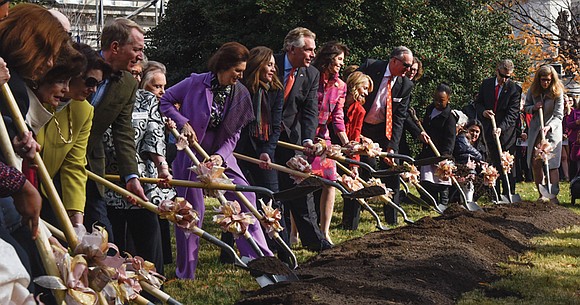 Gov. Terry McAuliffe, center, and his wife, First Lady Dorothy McAuliffe, to his right, are flanked by former Virginia first ladies Lynda Bird Johnson Robb (in purple) and Susan Allen (in pink) as they break ground Monday for the monument in Capitol Square that will honor women’s roles in Virginia’s history for more than 400 years. Photo by Clement Britt

On the sunny and brisk day, state officials, special guests, donors and hundreds of visitors from across the commonwealth attended the ceremony at Capitol Square.

The monument will honor the presence and contributions, genius and creativity of women in Virginia for more than 400 years.

The monument will depict 12 women in bronze statues, including four African-Americans. The women include some who are widely celebrated and others who are lesser known. It also will include a glass Wall of Honor to be etched with the names of hundreds of other noteworthy women.

The monument, which was approved seven years ago, will be located near the 9th Street entrance on the west side of the Capitol. It is expected to cost $3.7 million and is being spearheaded by the Virginia Women’s Monument Commission in collaboration with the Virginia Capitol Foundation and the 2019 Commemoration.

Dedication is expected in October 2019 during the celebration of the 400th anniversary of important milestones in Virginia’s history. Voices from the Garden is seen as giving more attention to the role that women played in establishing the Virginia colony.

The Women’s Monument is the first of its kind on the grounds of a state Capitol recognizing the contributions of women across four centuries.

“We are here today to celebrate women who played an important part in Virginia’s history,” Gov. Terry McAuliffe said during the ceremony. “Women who made such a difference — from the first settlers back in the early 1600s and the hardships they faced to the pioneers — a banker, educators and in other areas of commerce.”

In his remarks, Gov. McAuliffe alluded to today’s pivotal moment in addressing cases of sexual harassment against women.

“At a very difficult time that we have in our nation today, as we hear about different issues as it relates to women, I think it’s appropriate that we here in Virginia are leading the way.”

Nancy Rodrigues, Virginia’s secretary of administration, has been instrumental in moving the project forward. She attended the groundbreaking ceremony with her 2-year-old granddaughter, Celeste. She noted that had it not been for the achievements of women who paved the way, she would not have been able to achieve her dreams.

Ceremonial shovels wrapped with pink bows are lined up for the groundbreaking ceremony for “Voices from the Garden,” the new $3.7 million Virginia Women’s Monument in Capitol Square.

Voices from the Garden seeks to acknowledge some of the contributions of women that are missing in history books. The monument will be part of the fabric telling of the rich past.

“When you look at the pivotal events that changed history in Virginia, women were part of the contributions to make the commonwealth and America what they are today,” said Rita McClenny, president and CEO of the Virginia Tourism Corp.

Years have passed from the initial conception of a women’s monument to Monday’s groundbreaking. Karla Boughey, who was the legislative aide for former state Sen. Walter Stosch of Henrico County, recalled the phone call the senator’s office received from Em Bowles Locker Alsop about her vision for a monument.

“This lady was saying that we need to do something for women,” Ms. Boughey said. “She knew everybody and the history and the roles women played because she lived in Richmond all her life.”

After talking to Sen. Stosch, Ms. Alsop came to the state Capitol where she testified before several General Assembly committees to get the ball rolling.

“Ms. Alsop was so far ahead of her time. She believed in women and loved women. She accomplished so much,” Ms. Boughey said. “She was worried about the next generation not knowing women’s accomplishments from education to civic affairs.”

Ms. Allen, the wife of former Gov. George Allen, is chair of the Virginia Capitol Foundation, which is handling the money side of the project. She said $1.7 million has been raised for the monument, which is being funded privately.

She said the foundation hopes to raise another $150,000 to meet the requirements for a Cabell Foundation grant. Each of the bronze statues is expected to cost about $200,000.