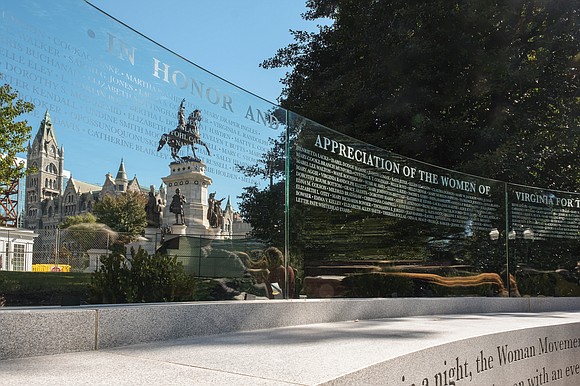 The glass “Wall of Honor,” which features the names of 230 women who have made an impact in Virginia since the 1600s, is just a portion of the new Virginia Women’s Monument in Capitol Square that is expected to be completed by October 2019. Ava Reaves

With about 50 mostly women state lawmakers and government officials attending, they unveiled and celebrated the latest phase of “Voices from the Garden” Virginia Women’s Monument that honors the impact women have had in the commonwealth and the nation.

Former state Sen. Mary Margaret Whipple of Arlington, vice chair of the Virginia Capitol Foundation, unveiled the monument’s curved glass “Wall of Honor” that is etched with the names of 230 women whose contributions and achievements to Virginia and the United States dating to the 17th century have gone largely unrecognized.

The names were gathered from Virginia historians and backed by research conducted by the Library of Virginia.

“This is an opportunity to come on these grounds and see a richer story being told,” Mrs. Allen told the enthusiastic crowd about the project that was started in 2010.

Mrs. Allen is chair of the Virginia Capitol Foundation.

The glass has space for more names. Officials said the public can nominate candidates for inclusion. However, they must be women who are Virginia natives or who have lived in the state most of their lives and died at least 10 years prior to consideration.

Tuesday’s unveiling comes less than a year after the December 2017 groundbreaking for the monument, which is to include bronze statues of 12 Virginia women, including four African-Americans and a Native American.

“The first four statues have been ordered, with only eight more to be ordered in time for the official dedication” in October 2019 in conjunction with the 2019 project, Ms. Whipple said.

The granite and glass monument was approved eight years ago with a $3.8 million price tag. Fundraising efforts are being spearheaded by the Virginia Women’s Monument Commission in collaboration with the Virginia Capitol Foundation and the 2019 Commemoration.

The 2019 Commemoration will hold yearlong activities and celebrations honoring the 400th anniversary of important milestones in Virginia history. The year 1619 marked the first representative legislative assembly in the New World, the arrival of the first recorded Africans in English North America and the recruitment of significant numbers of English women to the Virginia colony.

The monument, designed by Ivan Schwartz of Brooklyn, N.Y., next to near the 9th Street entrance to Capitol Square sits the new Virginia Native American monument.

Ms. Whipple said after Tuesday’s event that the foundation is working to raise the remaining $800,000 for the monument project.