More than 1,500 people attended Monday's ceremony in Capitol Square for the dedication of 'Voices from the Garden: The Virginia Women's Monument' 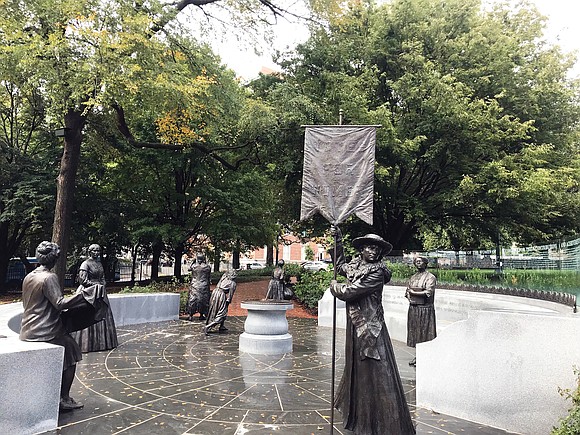 On a cloudy, yet cool fall Monday, Virginians celebrated women’s contributions to the advancement of the Commonwealth with the dedication of “Voices from the Garden: The Virginia Women’s Monument.”

More than 1,500 people attended the ceremony in Capitol Square, where seven life-size statues of women leaders from diverse backgrounds and eras were unveiled. When completed, the monument will have 12 statues.

The monument, the nation’s first on the grounds of any state capitol created to honor women, also features a curved glass Wall of Honor etched with the names of 230 women whose achievements and contributions have boosted Virginia and the United States dating back to the 17th century.

Throngs of people walk around the Virginia Women’s Monument in Capitol Square following Monday’s dedication ceremony. In addition to the bronze statues, the monument has a curved glass Wall of Honor etched with the names of 230 outstanding Virginia women who made contributions to the state and nation during the last 400 years.

Mary Margaret Whipple, vice chair of the Women’s Monument Commission, said the monument honors women in a way that is not mythic or symbolic.

“These women rose to the occasion and made significant achievements,” Ms. Whipple told the crowd. “They were from all walks of life, from different times and places. They were famous and obscure. Real women. Even imperfect women, who have shaped the history of this Commonwealth.”

The Virginia General Assembly established the commission in 2010 to recommend an appropriate monument in Capitol Square to honor the contributions of women to Virginia over the past 400 years.

The dedication, held on Indigenous Peoples’Day, also coincides with the 100th anniversary of women’s suffrage in America.

As the sun broke through the clouds just before noon, Girl Scouts from three councils in Virginia pulled back the blue cloths that draped the statues, revealing the dramatic bronzes sculpted by New York-based artist Ivan Schwartz.

Feeling the spirit of the moment, Teddy Parham of Richmond responds to singer Joyce Johnson Rouse’s musical tribute “Standing on the Shoulders” during the ceremony.

Susan Clarke Schaar, clerk of the Virginia Senate, spoke about the decade-long process for the design and realization of the monument. She worked with historians and others on the design.

Gov. Ralph S. Northam thanked the commission for steering the project and raising the more than $800,000 to make the monument a reality.

He said the monument is long overdue.

“For far too long we have overlooked the transformative contributions of women and other underrepresented groups,” Gov. Northam told the crowd. “Until recently, that has been the case on Capitol Square as well.”

Capitol Square also is home to the Virginia Civil Rights Memorial, which was erected in 2008, and “Mantle,” a monument dedicated to Virginia’s Indian tribes, in 2018.

“Our work does not end with these bronze statues and etched names in these walls,” Gov. Northam told the crowd. “To honor these women, we must make sure women are paid at the same level as men, protect women’s health care rights as well as eliminate domestic violence and sexual assault.”

Richmond-based historian and researcher Elvatrice Belsches, who has done extensive research on Virginia Randolph and Elizabeth Keckly who are African-American, was touched by the occasion.

“It is an enormous blessing to be here today to witness this unveiling,” Ms. Belsches said. “To see these ladies, whose achievements are internationally known, get their just do is priceless.”

Five more statues will be added as they are funded and completed. They are Maggie L. Walker, the first woman to found and operate a bank in the nation, and Dr. Sarah Garland Jones, a pioneering Richmond physician and teacher, both of whom are African-American; Martha Custis Washington, America’s inaugural first lady; Clementina Bird Rind, the first female printer in Virginia; and Sally Tompkins, a Confederate hospital administrator.

Susan Shibut of the Capital News Service contributed to this report.