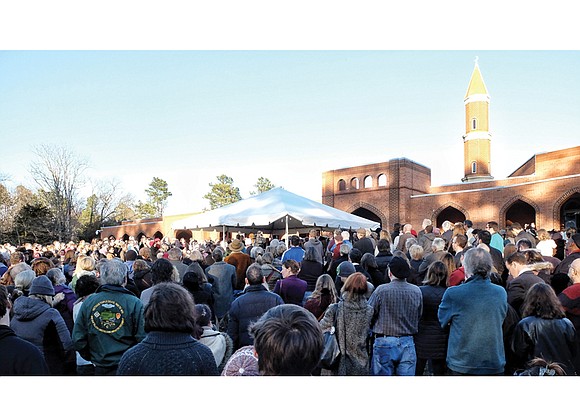 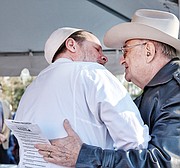 He described how the Muslim community welcomes everyone who wishes to live in peace and security. They do not support anyone who poses a danger. They pledge to work with law enforcement to make a strong community, he said.

Despite the differences in beliefs, there are commonalities among the faith communities.

“We can humbly agree to disagree, but work for the common good of our community,” said the Rev. Janet Winslow of Bon Air Presbyterian Church. “In the midst of our diversity, we find our unity.”

“The core message of our faiths is the same — love your neighbor as yourself,” she said. “Your pain is my pain. Your joy is my joy. Your fate is my fate. We are all interconnected.”

She encouraged the crowd to go beyond words and take action.

“Justice, equality and liberty for all depends on all of us and our daily behavior. It is up to us to form a more perfect union, not by retreating into our separate corners, but by coming together boldly,” she said.

Imam Amonette said those who disregard the Constitution can only do so by dividing people, but it is a commitment to the Constitution, not religion, culture or race, that makes people Americans.

“We have worked to make an inclusive society. How can we leave a nation full of fear to our children and grandchildren?” he said.

U.S. Sen. Mark Warner, who joined Sen. Tim Kaine and other Democrats to co-sponsor a bill to rescind President Trump’s ban, assured the group that Virginia is open to people of all faith backgrounds.

“We welcome our immigrants. We value your contribution,” he said. “We are going to stand up against hate, anger, comments against our neighbor and turning our backs on refugees, particularly of the Muslim faith.”

Virginia helped pioneer the ideals of religious freedom with Thomas Jefferson’s Virginia Statute for Religious Freedom in 1786, which laid the foundation of the religion clauses of the Constitution’s First Amendment, he said.

The immigration ban is not representative of Virginia or America. America’s motto is “E Pluribus Unum,” meaning “from many one.”

“That is what we are reflecting here today,” he said.

Congressman A. Donald McEachin of Henrico, who also opposes President Trump’s ban, said he is buoyed by the evidence of people supporting Muslims and refugees with protests across the country, lawyers working to help people enter the country and federal courts overturning the ban.

“We are going to reassert our beliefs in classical liberal democracy that all men and women are created equal,” he said. “We will push back against this.”