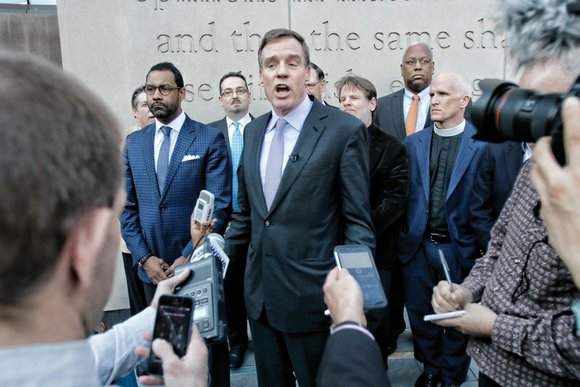 “It’s been ongoing,” the thoughtful imam told the Free Press of anti-Islamic incidents.

Imam Amonette and a group of Muslim, Christian and Jewish faith leaders and U.S. Sen. Mark Warner held a news conference last Friday outside the Valentine First Freedom Center in Shockoe Bottom to promote religious tolerance and call for an end to anti-Muslim rhetoric.

Imam Ammar Amonette of the Islamic Center of Virginia in Bon Air stands before a monument to Thomas Jefferson’s Virginia statute for religious freedom at the Valentine First Freedom Center in Shockoe Bottom.

Among the hate incidents members of his congregation have experienced in recent days:

• Someone left Nazi leaflets with swastikas on the grounds of the Islamic Center at 1241 Buford Road in Bon Air.

• A man in a car yelled, “You’re a terrorist! Go home!” to a young girl wearing a burka as she was getting off a school bus.

• A group of men physically accosted a woman who works for the federal government in Downtown as she walked to her car.

Surrounded by the faith leaders, Sen. Warner called for calm and respect for the Muslim community as he stood before a monument to Thomas Jefferson’s religious freedom statute at the center.

“This statute guaranteed religious freedom in Virginia and those same principles were built into our Constitution and our Bill of Rights,” he said.

“Some would say those freedoms are under attack today,” he continued. “And as an elected leader, and most importantly, leaders of faith, we want to stand up and reaffirm the principles that make America unique.”

He said he understands that people are afraid because of the latest terror attacks. But he talked about several actions taken to improve national security, including tightening the visa waiver and finance programs.

But he said he will make a global commitment, as well as to those within the local community, to stem terrorist activity.

“We also need to make sure that we work with our faith leaders, particularly the Muslim-American community, to ensure that if you see a family member or a friend in the process of being radicalized, that you have faith enough in our law enforcement system that you can step forward in a way where someone will be treated with respect and within the due process of law,” he said.

Earlier in the day, Imam Amonette attended a rally in Bon Air, where about 60 people showed their support for the mosque and its congregation and called for religious tolerance.

At the religious freedom center, Imam Amonette said, “There are a lot of people in our community who are recent citizens or immigrants to the United States and they may feel that maybe they don’t know what their place is in this society — whether they are welcome or not.

“It really means a lot to them that people came out to support them,” he added.