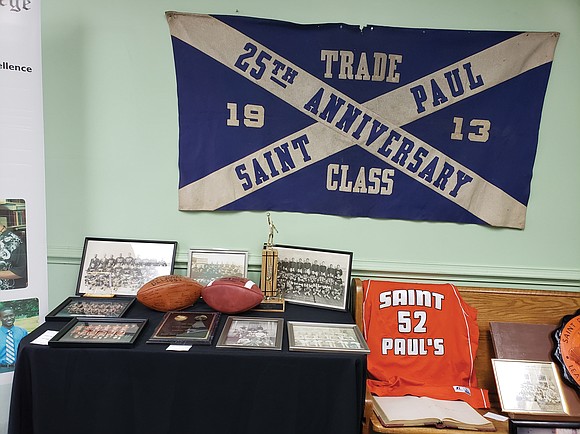 The collection of artifacts and memorabilia at the James Solomon Russell-Saint Paul’s College Museum and Archives is outgrowing its current home at 219 N. Main St. in Lawrenceville. Organizers plan to move the museum to larger quarters in the Brunswick County Conference Center this summer. VCU Capital News Service

“Challenge by choice” was the motto of Saint Paul’s College, which closed in 2013 because of financial problems and declining student enrollment.

Now the citizens of Lawrenceville are living up to that motto — by taking up the challenge of collecting and preserving artifacts documenting the 125-year history of the historically black college.

Lawrenceville residents and other supporters of Saint Paul’s College have opened a museum to showcase documents and memorabilia, including an original copy of “Adventure in Faith,” an autobiography written by the Rev. James Solomon Russell, who was born enslaved, became an Episcopal priest and founded the school in 1888.

The year-old museum has been such a success that it is ready to expand to a new location.

“We’re trying to create a place that could be a home to the alumni and that they can identify with,” said Bobby Conner, vice chairman of the project.

Conversations about how to keep the college’s memory alive began in 2012, the year before the school shut its doors.

“We saw the writing was on the wall,” said Sylvia Allen, a member of the conservation effort. Thus the James Solomon Russell-Saint Paul’s College Museum and Archives was born.

James Grimstead is the museum’s chairman and director. He and Mr. Conner discussed the idea with Saint Paul’s officials for a year before they decided to close the school.

Because there was much uncertainty about whether the college would remain open, Mr. Conner was hesitant to raise the subject, but he knew it was important.

“What could’ve happened is that the university could’ve closed on June 30 (2013) and the creditors could’ve come on July 1,” Mr. Conner said. “If the creditors would’ve got involved, this museum would never have happened.”

The school, which was on the National Register of Historic Places, was founded as Saint Paul Normal and Industrial School and then became Saint Paul’s Polytechnic Institute in 1941. The name was changed in 1957 to Saint Paul’s College to reflect its liberal arts curriculum.

The college’s demise followed pressure from the Southern Association of Colleges and Schools, which revoked Saint Paul’s accreditation because of “lack of financial stability” and other reasons.

The nonprofit museum opened last April in downtown Lawrenceville, a town of about 1,400 people in Brunswick County that borders North Carolina. It quickly filled with artifacts dating to the late 1800s. Among them are a 1922 college guestbook, a 1973 student newspaper and decades-old class photos, sports trophies and banners.

According to Mr. Grimstead and Mr. Conner, if they had not rescued the artifacts, the mementos likely would have remained in the campus’ abandoned buildings, which have weathered over time. Problems like mold would have seriously damaged many of the items.

Several alumni, including former NBA player Antwain Smith, have visited the museum to travel down memory lane and to reflect on the students who came before them.

Teya Whitehead, who graduated from Saint Paul’s College in 1998, was devastated when she first heard that the school was closing. She still finds it a difficult pill to swallow.

But with the establishment of the museum, the happy memories of her college days will be preserved.

“My favorite memory was the overall camaraderie that we had. Many of my lifelong friends are still in contact with me today,” Ms. Whitehead said. “The school was a very family-oriented environment.”

With the sheer amount of memorabilia, the museum’s current location has become cramped. There are plans to move the museum to the former Saint Paul’s College Student Center, which now serves as the Brunswick County Conference Center. A grand reopening is scheduled for Aug. 10.

“I never imagined while moving that stuff that we’d be where we are today,” Mr. Conner said. “I was just getting it off campus to protect it.”