Power, resistance and spiritual beliefs all told in Richmond cemeteries 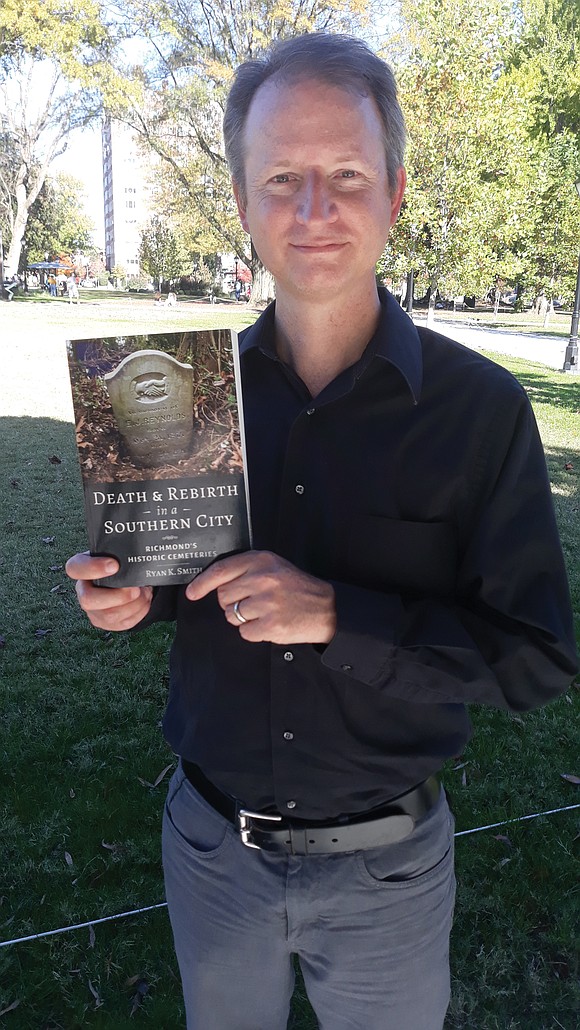 History professor Dr. Ryan K. Smith said he became hooked on local cemetery history after touring sites with a colleague and talking with caretakers and preservationists. Photo by Jeremy Lazarus

To Dr. Ryan K. Smith, cemeteries are ideal places to learn about the past and present of a community.

And in his study of Richmond’s burial grounds, the Virginia Commonwealth University history professor has found one constant in the changes that have occurred over time: The color line.

As he put it: “The effort by whites to diminish the humanity expressed in the deaths of Indians, Blacks and other challengers to the city’s order” has long held fast.

Still, he views the ongoing modern efforts to restore and recognize, in particular, neglected and often forgotten Black cemeteries as a harbinger of hope and change that could make Richmond a model for other communities.

Dr. Smith, who for 10 years has made cemeteries a mainstay of the courses he teaches at VCU, offers that view in a new book he has written that takes a fresh look at more than a dozen of the city’s historically and culturally significant cemeteries — both Black and white.

Called “Death and Rebirth in a Southern City: Richmond’s Historic Cemeteries,” and released Nov. 17 by Johns Hopkins University Press, the book tells the stories of private Evergreen Cemetery, as well as Hebrew Cemetery and of the Black burial grounds in Shockoe Bottom and Shockoe Hill as well as white burial grounds Shockoe Hill and Hollywood cemeteries.

His work brings together his own research, information students he has worked with developed along with details from hundreds of hours of oral histories and interviews he and others undertook.

He said previous books on Richmond burial grounds have focused on either one specific cemetery or on cemeteries of one group, such as the history Veronica Davis wrote concerning black cemeteries that galvanized the effort to preserve and protect the historic Barton Heights Cemetery developed by Black organizations.

Dr. Smith said he believes that a broader approach helps produce a fuller picture. Despite the racial separation, he said that “Southern lives are interrelated. I don’t think we can understand a place like Hollywood Cemetery, where the city’s white elites are buried, without understanding the connections its arts and its families have to African-American burials at Evergreen Cemetery or Union graves at Richmond National Cemetery.”

In his view and as expressed in his book, cemeteries can be places of contemplation, but they often “participate in the rawest political drives, conferring legitimacy on some while denying it to others. They teach us about power and resistance as much as about spiritual beliefs.”

A Florida native and architect’s son, Dr. Smith said that he has “been fascinated by cemeteries for a long time,” in part because of their relation to church design.

He did not start out studying cemeteries after arriving at VCU in 1999. Instead, he focused his teaching and research on the changes in religious buildings in America. That resulted in is his first book, “Gothic Arches, Latin Crosses: Anti-Catholicism and American Church Designs in the 20th Century.”

He also spent time writing a biography of Robert Morris, a key figure in financing the American Revolution, and his architectural and financial failures.

Dr. Smith said his interest in cemeteries was revived after Dr. Douglas Winiarski, a colleague at the University of Richmond, “suggested that we co-teach a course on the history of Richmond’s burial grounds.”

“Once we began touring the sites and engaging with caretakers and preservationists, I was hooked,” said Dr. Smith.

They eventually taught a course together for one semester a few years later.

He said students and participants in a separate continuing education course have found it to be a yeasty subject. “There’s just so much to see at the grounds, from the colonial origins of the city through revolution, slavery, immigration, war, emancipation and even up to present day.”

Dr. Smith noted that many of the cemeteries that appear stable have undergone radical change and even the best known white cemeteries, such as Hollywood, have faced survival challenges.

Most surprising, he said, is how lively the grounds are. He said he and his students have seen a wide range of activities, from protests and prayers to theatrical productions and dance performances.

Instead of neutral landscapes, cemeteries “continue to offer us lessons,” he said. “Learning about death is oddly inspiring.”