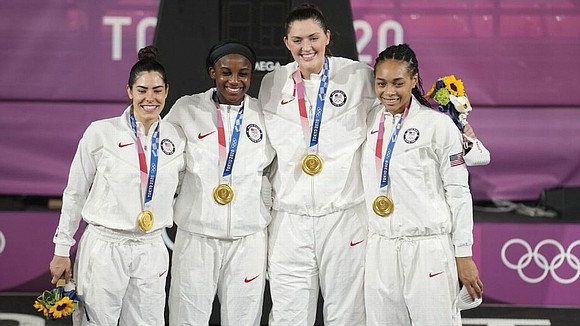 A new sport was unveiled at the Tokyo Olympics and the United States ran away with the top prize.

It’s not surprising the Americans prevailed considering the glowing résumés involved. All were college sensations and all are now active WNBA players.

• Dolson: 6-foot-5; helped the University of Connecticut win NCAA titles in 2013 and 2014; currently with the WNBA Chicago Sky.

• Gray: 6-foot; was standout on University of South Carolina NCAA championship team in 2017; now with the Dallas Wings.

Plum led the United States in scoring in Tokyo with a total of 55 points.

Teams are allowed only four players, meaning just one substitute.

In 3x3 competition, teams are awarded one point for a traditional basket inside the 3-point arc, and two points for a shot behind the bonus mark. Free throws are one point.

The rapidly played games are to 21 points or whichever team is leading after 10 minutes.

The U.S. men failed to qualify for the Tokyo event.