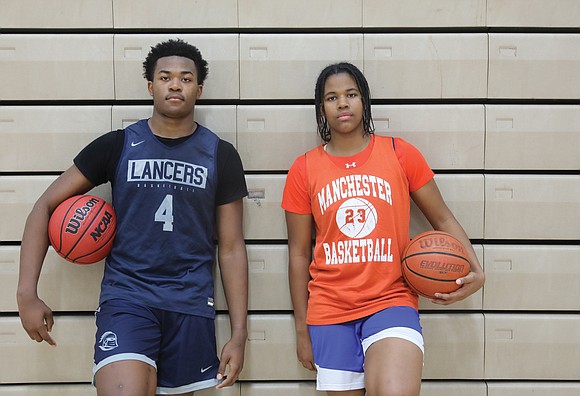 Makai Byerson, left, and Mia Woolfolk, both 15 and sophomores, are standouts on the boys’ and girls’ varsity basketball teams at Manchester High School in Chesterfield County. Woolfolk is the daughter of former University of Richmond player Pete Woolfolk, while Byerson is the son of former Virginia Union University and NBA G-League player Brad Byerson. Photo by Regina H. Boone

Woolfolk and Byerson—famous names from Richmond basketball archives—are back in hoops news, this time in Chesterfield County.

The Manchester boys are 8-0 heading into winter break. The Lancers’ girls’ team finished 7-1 for 2021.

It’s not surprising the teens are making headlines. Both hail from very tall and extremely athletic families.

Mia’s dad, 6-foot-6 Peter Woolfolk, starred at Richmond’s Jefferson-Huguenot-Wythe High School complex, where he led the Trojans to the 1984 State Group AAA title, and later at the University of Richmond, where he helped the Spiders reach the NCAA Sweet 16 in 1988.

Mia’s brother is Jay Woolfolk, the former Benedictine College Preparatory athlete who is now on scholarship to play football and baseball at the University of Virginia.

Makai is the son of 6-foot-8 Brad Byerson, who starred at Virginia Union University, along with his younger brothers, Brandon and Braxton. Brad, who later played for the Sioux Falls Skyforce of NBA G-League, was All-CIAA and the CIAA Defensive Player of the Year under VUU Coach Dave Robbins in 2008.

Through games of Dec. 18, Mia Woolfolk was averaging about 18 points, nine rebounds and three steals per game in her first varsity season.

“Mia is smart and has an imposing physical presence,” said Coach Wright. “We’re just looking to expand her game, and she is very open to learning.”

Once the right-hander polishes her left-side moves, Coach Wright notes, “she’ll be among the best in the state.”

Woolfolk was a dynamic performer at Chesterfield’s Bailey Bridge Middle School in fall 2019 (middle school girls play in fall) and then played for the Manchester High School junior varsity team in 2019-20. She transferred to Trinity Episcopal last school year but did not compete due to an injury. Her return to Manchester High school thrilled the coaching staff.

Byerson made the Manchester High School varsity team as a freshman and is now a fixture in Coach Karlson’s front court.

“Makai is a man-child,” Coach Karlson said. “He’s got a big body. He’s very physical. And he can throw it down (dunk).”

Byerson has averaged about 13 points and nine rebounds, while serving as an intimidating defensive stop sign in the paint.

Woolfolk and Byerson are more than year-round basketball stars.

Mia is a standout softball player known for her power at the plate. Manchester’s short 190-foot fences should be much to her liking this spring.

Makai doubles as a Lancers football standout. His muscular play in the trenches helped Manchester reach the third round of the 6A Regionals this past season. He was an All-Region defensive end.

The Lancers’ boys’ basketball team is coming off a 12-2 season in 2020-21 and look even stronger this go-round.

On the other side, the Manchester girls’ team was just 3-10 a year ago. The addition of Woolfolk and freshman Rayne Wright, the daughter of Coach Wright, and others, have turned the tables.

Woolfolk and Byerson are almost too good to be true—so big, so strong, so talented. And they’re only sophomores.