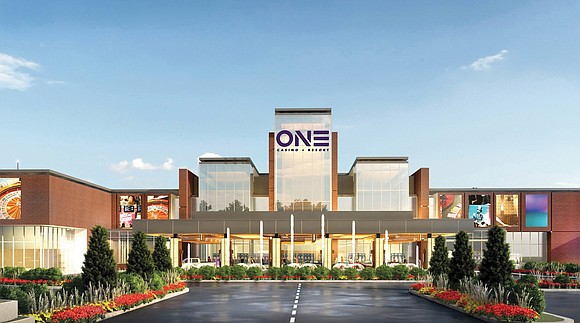 Richmond is moving closer to achieving its dream of having a gambling resort in South Side.

The proposed ONE Casino + Resort has leapfrogged two more hurdles and is on track to be on the Nov. 2 ballot seeking the required approval from city voters.

Monday night, City Council cleared one hurdle by unanimously approving agreements between City Hall and the selected operator, RVA Entertainment Holdings LLC, a subsidiary of Black media giant Urban One, which is seeking to open its first gambling operation at Walmsley Boulevard and Commerce Road at the Bells Road interchange with Interstate 95.

The agreements authorize the development of the gambling-entertainment-hotel project, call for the city to gain at least $29 million a year in revenue from the operation, promise nearly 1,000 full-time jobs with first preference to city residents and require the gambling to begin by October 2024.

The crucial casino vote came at City Council’s final meeting before the August recess during which the council also passed a symbolic resolution declaring racism a public health crisis in the city, rezoned a stretch of West Broad Street for 12- story, mixed-use buildings and awarded a $100,000 grant to Virginia Union University to create a mentoring program in Gilpin Court for young people under age 18.

Separately on the casino front, though not yet announced, the Free Press has been told the Virginia Lottery, the state’s casino regulator, has completed its preliminary review of the casino plan and given City Hall a green light to request that the Richmond Circuit Court put the issue on the ballot.

The request is expected to go to the court in the next several weeks, officials have indicated.

If Richmond voters overwhelmingly endorse the casino as Mayor Levar M. Stoney anticipates, the Lottery would then have a year to do a deep dive before deciding whether to issue the required casino license to operate.

During the meeting, Councilwoman Reva Trammell, whose 8th District includes the planned casino and resort site, touted the benefits expected from the project that would be among the largest ever south of the James River.

“This is a golden opportunity, not just for the South Side and the 8th District, but for the city as a whole,” Ms. Trammell said.

Others, including dermatologist Dr. Pamela Royal, whose family is listed by Urban One among the investors in RVA Entertainment Holdings, waxed enthusiastic about the project.

Not everyone is excited. Quinton Robbins of the advocacy group Richmond for All told City Council that a survey of people living west of the project found that 45 percent of residents oppose the casino while a substantial percentage are undecided.

Richmond for All is among the groups that oppose any casino development, arguing that it would extract money from lower- income residents, create mostly low-wage jobs and add little to city growth.

Whether the opposition proves significant, though, remains to be seen. So far, there has been no sign of a well-financed campaign.

If a majority of voters approve the casino during the November referendum, it would trigger the first stages of a project that City Hall is touting as a bonanza for Richmond.

According to the city documents, RVA Entertainment and its parent, Urban One, are projecting a total investment of $560 million, with about $420 million directly associated with the design and construction and the rest involving other costs associated with the project, including an upfront payment to the city. The agreements require the company to pay union wages for construction, incorporate union workers in 40 percent of the project and also strive to have 40 percent of the construction done by Black, Latino and other minority-owned companies.

Under the agreements, even before gaining a license, RVA Entertainment would have to immediately provide a $26.5 million upfront payment to the city that would be non-refundable. RVA Entertainment also would be required to complete the purchase of its preferred site from the current owner, Henrico County-based tobacco giant Altria and its cigarette arm, Philip Morris USA.

The company also must clear Philip Morris USA’s former operating center from the property to prepare for construction of the casino and attached 250-room hotel if the Lottery grants the license.

Assuming Lottery approval, the company is projected to begin construction of the casino in 2023, with an opening after 22 months. The agreement provides an incentive for the company to complete the project in less time. The company also would be required to have the 250-room hotel open for guests by October 2025.

In other business, City Council’s support of Mayor Stoney’s resolution declaring racism as a public health crisis lays the groundwork for policy changes and for budgeted investments to improve equity in the city, according to the administration.