Families plead for more information on missing loved ones 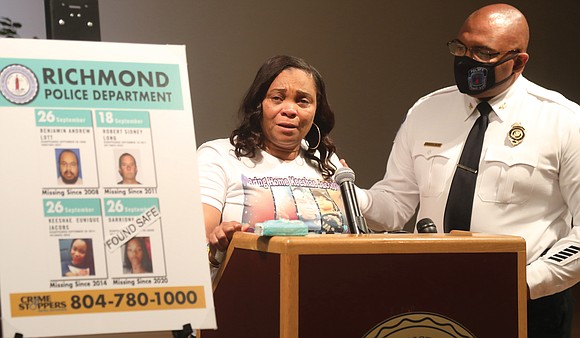 Toni Jacobs, who created Missing Person Awareness, talks about her daughter, Keeshae Jacobs, who vanished Sept. 26, 2016. Ms. Jacobs and others, including Richmond Police Chief Gerald M. Smith, asked during a news conference on Monday for the public to report any information that may lead to finding the missing persons. Photo by Regina H. Boone

Richmonder Toni Jacobs wishes that her missing daughter could have gained the kind of national and social media exposure that the family of 22-year-old blonde Gabby Petito experienced.

Finding Ms. Petito became a national obsession after her family reported her missing from her Sarasota-area residence and drew national press attention. That obsession has now transferred to the hunt for her fiancé, a prime suspect in her slaying after her body was discovered in a remote section of Wyoming.

Ms. Jacobs understands the pain the Petito family is feeling. She has lived with the same kind of pain for five years since her daughter, Keeshae, disappeared on Sept. 26, 2016, without a trace.

“This makes me angry because my missing daughter only received local coverage when she went missing,” Ms. Jacobs said.

What happened to her daughter remains a mystery. Local police have not found any clues or the young woman’s body.

Her case has received new local attention during the fourth annual “Missing Person Awareness” program that Ms. Jacobs created to shine a light on people who cannot be located.

This year’s program spotlighted Keeshae and two other Richmonders who went missing during the month of September, Benjamin Lott and Robert Long.

Ms. Jacobs created “Missing Person Awareness” for her daughter and others in hopes of sparking new tips and leads for police. Richmond Police Chief Gerald M. Smith joined Ms. Jacobs and members of the families of the two men at a news conference Monday to encourage the media to continue spread the word about the missing trio.

Ms. Jacobs has been fighting and searching for five years to find Keeshae, who was 21 when she disappeared and would now be 26.

Ms. Jacobs said that Keeshae, who lived in South Side, was last seen by a family member whom her daughter promised to see the next day.

She was last seen wearing black basketball shorts, pink and black Nike basketball shoes and a pink scarf. She had tattoos on her right foot, right leg and right hand of a leaf, paws and a flower, respectively.

During the news conference, Ms. Jacobs stood before news cameras with her head down, clearly overflowing with emotion that initially made her unable to speak. After Chief Smith consoled her, a tearful

Ms. Jacobs said, “Keeshae has family that loves her. Please help me. Help my daughter. Help our loved one. Help our family.”

In an interview, Ms. Jacobs was frank in expressing her concern that race was a big factor in explaining why Ms. Petito’s disappearance garnered widespread attention that so many families of color cannot get when their children go missing.

Ms. Jacobs said she believes that the urgency is often missing among law enforcement for those who report a missing relative, particularly an adult like Keeshae.

“They brush it off like it’s no big deal. They act like we — African-Americans — just run away,” she said with a hint of anger. “Everybody that’s Black does not have problems at home or families that don’t love them.”

She believes all missing persons cases deserve the same amount of attention, regardless of the color of the person’s skin.

Mr. Lott lived in the 6300 block of Elkhardt Lane in South Side before he disappeared.

According to police reports, the last person to hear from him was his girlfriend, who lives out of town. He called to wish her a happy birthday and talked about bringing her to Richmond later in the month for an extended stay. She was not identified.

According to police, Mr. Lott ended the conversation with a promise to call her back in about an hour, and that is the last time anyone is known to have spoken with him.

His black Saturn Vue was later found abandoned at a shopping center in the 4800 block of Commonwealth Center Parkway, miles from his home. His car was impounded and towed.

Mr. Lott would now be 43 years old. At the time of his disappearance, according to police, he was 5-foot-10 to 5-foot-11 and weighed 150 to 165 pounds. He has black hair and brown eyes, wears eyeglasses and answers to the name Ben.

Mr. Lott’s daughter, Chris Lott, who lives out of town, made a poignant appeal during the news conference for anyone who saw something to report it to authorities. Any leads or tips would be appreciated, she said.

“I miss my dad. I love him. He is a caring, loving father that I miss. I wake up every morning hoping I would see him again,” Ms. Lott said as she wiped away tears.

Mr. Long’s address was listed as the 5500 block of Belmont Avenue in the city’s West End until his parents reported him missing. However, at the time, he was panhandling to gain a little money, authorities said..

Police said the circumstances of his case indicate Mr. Long might have needed mental health attention.

Officers contacted nearby psychiatric facilities and shelters in hopes of locating him or his vehicle, a 1999 green Honda, which has never been found.

Chief Smith urged anyone with information about any of the three cases to call Crime Stoppers at (804) 780-1000. The information can be provided anonymously, he said, and if the information leads to arrest, the caller would be eligible for a $1,000 reward.