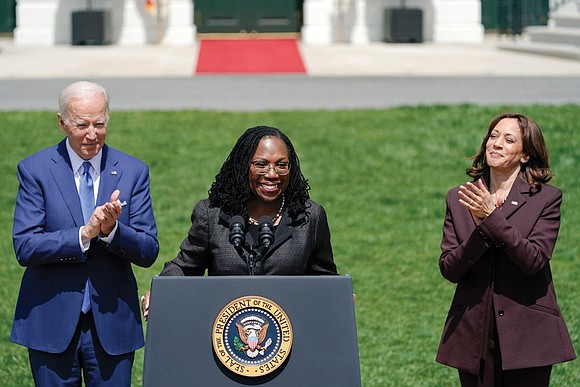 President Biden and Vice President Kamala Harris applaud Judge Ketanji Brown Jackson as she speaks during a ceremony April 8 on the South Lawn of the White House celebrating her confirmation as the first Black woman to be confirmed to the U.S. Supreme Court. Photo by Andrew Harnik/Associated Press

WASHINGTON - “In my family, it took just one generation to go from segregation to the Supreme Court of the United States.” With those words, incoming Justice Ketanji Brown Jackson acknowledged both the struggles and progress of Black Americans in her lifetime.

Tearful and emotional in embracing the history-making moment, Justice Jackson said her confirmation as the first Black woman to the U.S. Supreme Court showed the progress of America, declaring, “We’ve made it — all of us.”

She spoke those words on the South Lawn of the White House last Friday, one day after her historic U.S. Senate confirmation, in paying tribute to previous generations of Black Americans who she said paved the way for her elevation to the nation’s highest court.

“I have now achieved something far beyond anything my grandparents could have possibly ever imagined,” Judge Jackson said, noting they had gained only grade school educations before starting their family and later sending their children to racially segregated schools.

“The path was cleared for me, so that I might rise to this occasion,” she said. “And in the poetic words of Dr. Maya Angelou, I do so now. I am the dream and the hope of the slave,” Judge Jackson said in quoting a line from the late Dr. Angelou’s famous poem, “And Still I Rise.”

Judge Jackson, a 51-year-old appeals court judge with nine years of experience on the federal bench, achieved a dream she has had since childhood when the Senate voted to confirm her on April 7, to become the 116th associate justice and the first Black female justice ever.

Judge Jackson will take her seat as a new justice when her mentor, Justice Stephen Breyer, for whom she clerked after earning her law degree at Harvard University, steps down following the end of the court’s current term on June 30.

She was watching the televised Senate proceedings from the White House with President Biden when she was confirmed on a 53-47 vote, mostly along party lines. Three Republicans, Sens. Susan Collins of Maine, Lisa Murkowski of Alaska and Mitt Romney of Utah, broke ranks with the remaining GOP members and supported her confirmation.

Presiding over the vote was Vice President Kamala Harris, also the first Black woman to be elected to that office. As she left the Capitol, the vice president told reporters she was “overjoyed, deeply moved.”

President Biden, who nominated Judge Jackson after promising to seat a Black woman on the court, tweeted afterward that “we’ve taken another step toward making our highest court reflect the diversity of America.”

Senate Majority Leader Chuck Schumer, who led the united 50 Democrats, exulted that it was “a wonderful day, a joyous day, an inspiring day — for the Senate, for the Supreme Court and for the United States of America.”

When she is seated, Judge Jackson will be just the third Black justice on the court, after Justices Thurgood Marshall and Clarence Thomas, and the sixth woman. Her arrival on the bench won’t upend the current 6-3 conservative balance. But in addition to the racial history, it will for the first time put four women on the court at one time. She will join Justices Sonia Sotomayor, Elena Kagan and Amy Coney Barrett on the nine-member court.

During four days of Senate hearings last month, Judge Jackson spoke of her parents’ struggles through racial segregation and said her “path was clearer” than theirs as a Black American after the enactment of civil rights laws. Her parents became educators and community leaders in Miami, Fla., where she grew up.

She attended Harvard University as an undergraduate and for law school, served as a public defender, worked at a private law firm and served on the U.S. Sentencing Commission before becoming a U.S. District Court judge in Washington, D.C. She will be the only justice with experience defending people, and her résumé shows more varied experience in the law than most of the current justices.

She told senators she would apply the law “without fear or favor,” and pushed back on Republican attempts to portray her as too lenient on criminals she had sentenced.

Her eventual elevation to the court will be a respite for Democrats, who fought three bruising battles over former President Trump’s nominees and watched Republicans cement a conservative majority in the final days of his term with Justice Barrett’s confirmation.

“It is vitally important that we, as Black people, continue to remind this nation from whence we came,” she said. “The pain that it took to get to a ‘Justice Ketanji Brown Jackson’ could not be understated.”

“For all of the talk of this historic nomination and now confirmation, I think of them as the true path breakers,” Judge Jackson said. “I’m just the very lucky first inheritor of the dream of liberty and justice for all.”

Melanie L. Campbell, president and chief executive officer of the National Coalition on Black Civic Participation and convener of the Black Women’s Roundtable, said there was palpable joy over what the new justice symbolizes for the country.

As the sun shined through the clouds last Friday at the White House ceremony, Ms. Campbell said, “It just felt like the ancestors were dancing.”

“I can see myself, in now-Justice Ketanji Brown Jackson,” Ms. Campbell added. “(She) understands the significance of this moment for Black women, for women, for the nation. And it is a game changer.”

Others attending the ceremony also noted the diversity at the event and the image at the center — President Biden flanked by the first Black female Supreme Court justice and the first Black and Asian American vice president.

Vice President Harris on Friday also spoke of the meaning of Judge Jackson’s confirmation for her young, Black goddaughter.

“When I presided over the Senate confirmation vote yesterday, while I was sitting there, I drafted a note to my goddaughter,” Vice President Harris said. “I told her that I felt such a deep sense of pride and joy about what this moment means for our nation and for her future.”

Speaking directly to Judge Jackson, the vice president added: “And I will tell you, her braids are just a little longer than yours.”

Ms. Turner said Judge Jackson’s elevation is cause for celebration for people of all races and creeds in this country.

“Not only should the entire Black community be proud, the entire country should be proud because this has certainly been a long time coming,” she said. “And from this victory, we certainly have an opportunity to continue to build and create more victories. We’re not done yet.”