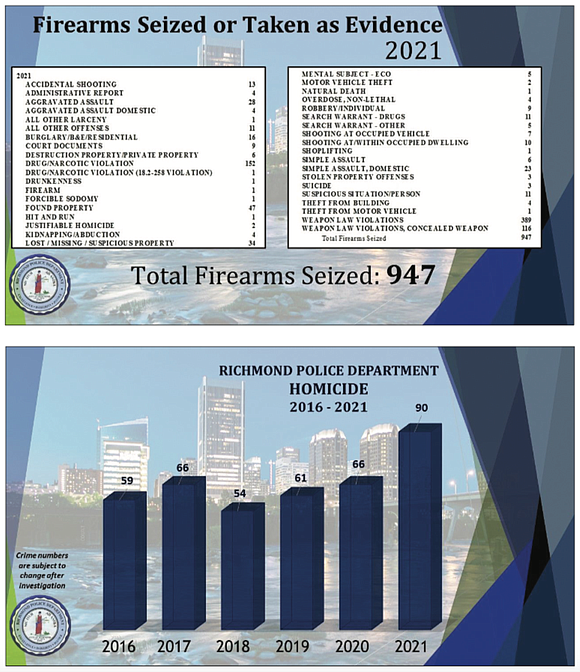 Richmond saw an uptick in homicides last year, much of it attributable to young people, according to a recent Richmond Police Department report.

Last November, the city reached 90 homicides since January 2021, the highest number of homicides in a decade, and 66 percent higher than 2020, according to police data. Meanwhile, violent crimes such as arson, burglary, larceny and car theft decreased from the previous year.

However, that was not the case in Richmond, he said.

The police department report also noted that young people are behind much of the violence.

“It’s very concerning,” not only for police for most Richmonders, Chief Smith said. “We all need to do everything we can to reach out to our youths to make sure they are guided in the way they need to be guided.”

Gun theft has a direct connection to increasing homicide, as well as robberies involving young people, according to the report.

“We recovered 947 guns last year and over half of them were stolen,” Chief Smith said. He advised city residents to be responsible by safely securing firearms, many of which are being stolen.

“How are they getting into the hands of kids? Because they’re being stolen,” he said.

Chief Smith said he is committed to working with Richmond Public Schools to address the city’s crime, and hopes the community will be more engaged, too.

In 2021, there were 101 city slayings and 90 homicides. This is the most homicides the city has had since 2004, the department stated.

The department does not include accidental shooting deaths and self-defense killings in the homicide numbers.

“Numbers are numbers, but behind each of these numbers there is a person, there’s a family, there are loved ones, there are people who care for that individual,” Chief Smith said.