Minus any roar of the crowd or stomping feet, Virginia Union University made all the noise it needed in last Saturday’s game against Virginia State University, swishing balls through the nets. 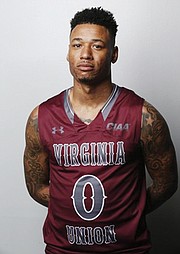 Because of COVID-19 restrictions, only “essential personnel” were allowed inside the 5,000-plus seat facility for the game.

VUU’s 88-70 victory over the Trojans came before what was likely one of the least attended contests in an intense rivalry dating to the early 1900s.

In absence of any fans in the stands, the stars came out in force for the visiting Panthers, who improved to 11-3 overall and first place 4-0 in the CIAA Northern Division. Two of VUU’s losses this season were in overtime.

Coach Lonnie Blow’s Trojans fall to 5-8 overall and 2-4 in the CIAA. The teams will have a rematch Saturday, Feb. 5, at VUU’s Barco-Stevens Hall.

Following a 2020-21 season of “hibernation” due to the pandemic, the Panthers have returned to the court with claws out.

Tate, a transfer from Niagara University, shared the spotlight in Ettrick with many others. The Panthers’ Robert Osborne had 18 points and eight rebounds; Jordan Peebles had seven rebounds to go with 18 points; Raemaad Wright chipped in 13 points and 10 rebounds; and Darius Hines had five assists.

For the hosts, Francis “B.J.” Fitzgerald’s 23 points for the Trojans were decorated by five 3-pointers.

Tate’s career-high 24 markers was built on 9-for-14 from the field and six-of-10 behind the arc. The physical 6-foot-3 guard is also a key man on the perimeter in VUU’s signature “circle zone” defense that has confused and haunted the Panthers’ opponents since the late 1970s.

VUU Coach Jay Butler learned the fine points of the defense playing for VUU in the 1990s under Coach Dave Robbins.

VSU had little success penetrating the maze. The Trojans shot 37.5 percent from the floor with 34 of the 72 attempts launched from a distance.

The traditional January meeting between VUU and VSU preceding Dr. Martin Luther King Day doesn’t look the same as in the past. For many years, the matchup was held at the Richmond Coliseum on a Sunday night and billed as “The Freedom Classic,” with many auxiliary events. Crowds approaching 8,000 were common.

That all changed when the Downtown facility was shuttered in February 2019. Since then, the VUU-VSU matchups have been played on campus at VSU and/or VUU with smaller crowds and less fanfare.

The annual CIAA Tournament is set for Feb. 22 through 26 in Baltimore, with VUU looking like the favorite for now.