What we’ve learned, and what’s next 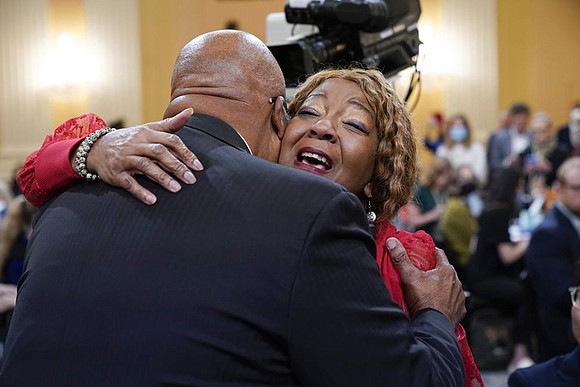 On Tuesday, Rep. Bennie Thompson, D-Miss., hugs Ruby Freeman, mother of Wandrea “Shaye” Moss, a former Georgia election worker, as the House select committee investigating the Jan. 6 attack on the U.S. Capitol continues to reveal its findings of a year-long investigation, at The Capitol in Washington. Photo by Jacquelyn Martin/Associated Press

WASHINGTON - The House committee investigating The Capitol insurrection heard from election workers and state officials on Tuesday as they described former President Trump’s pressure to overturn his 2020 election defeat. On Thursday, the nine-member panel will hear from former Justice Department officials who refused Trump’s entreaties to declare the election “corrupt.”

The committee’s fourth and fifth hearings, held this week, are part of an effort to show how Mr. Trump’s pressure eventually shifted to Congress, where his false declarations of widespread election fraud led directly to the riot on Jan. 6, 2021, when hundreds of his supporters violently breached The Capitol and interrupted the certification of President Biden’s election victory.

In July, the panel will hold at least two more hearings that are expected to focus on the far right domestic extremists who attacked The Capitol and what Mr. Trump was doing inside the White House as the violence unfolded.

State officials testified at Tuesday’s hearing about the extraordinary pressure they faced from Mr. Trump after the election to try and invalidate President Biden’s win.

Arizona’s House speaker, Rusty Bowers, testified about phone calls from Mr. Trump and his allies asking him to decertify Arizona’s legitimate electors and replace them. Georgia Secretary of State Brad Raffensperger told of the now-infamous phone call when Mr. Trump asked officials there to “find 11,780” votes.

“You are asking me to do something against my oath, and I will not break my oath,” Mr. Bowers said he told Mr. Trump and his allies. He recalled lawyer John Eastman, a chief architect of Trump’s plan to create slates of fake electors, telling him to “just do it and let the courts sort it out.”

Mr. Bowers said he repeatedly asked Mr. Trump’s team for evidence of the widespread fraud they were claiming, but they never provided it.

Mr. Raffensperger said his team investigated all of Mr. Trump’s claims and went down every “rabbit hole,” finding nothing. But Mr. Trump wouldn’t accept it.

The committee’s third hearing last week featured testimony from former aides to Vice President Mike Pence. The aides described the then-president’s efforts to persuade Mr. Pence to veer from his ceremonial role and object as Congress counted the electoral votes on Jan. 6.

Mr. Pence concluded from the start, his former counsel Greg Jacob told the committee, that “there is no justifiable basis to conclude that the vice president has that kind of authority.”

Mr. Trump did not let up, even after his supporters were breaking into The Capitol and Pence was hiding in an undisclosed location – at one point just 40 feet from the rioters, the committee said. Mr. Trump sent a tweet that afternoon saying that Pence did not have the “courage” to do what was necessary.

The committee played video of the rioters outside the Capitol calling for Mr. Pence’s death.

“Donald Trump turned the mob on him,” said Mississippi Rep. Bennie Thompson, the chairman of the panel.

The hearings have repeatedly showed how Mr. Trump moved forward with his baseless claims of fraud even as his top advisors told them they weren’t true.

The committee played video testimony from several aides who said they disagreed with the plan or tried to talk Mr. Trump out of it — even though few of them spoke out publicly at the time. Even his daughter, Ivanka Trump, said she “accepted” the conclusion of former Attorney General Bill Barr, who resigned after telling the president there was no evidence of widespread fraud.

The efforts to persuade Mr. Trump started on election night, when the race was still too close to call. Lawyer Rudy Giuliani told Mr. Trump to just go ahead and declare victory. Mr. Trump campaign manager Bill Stepien said in one interview clip that he told Mr. Trump it was “way too early” for such a pronouncement. But Mr.Trump did it anyway.

“Frankly, we did win this election,” Mr. Trump said before the cameras.

The committee used video clips of testimony from Mr. Barr, who told Mr. Trump he had looked into the allegations and found no evidence that any of them were true. He said he tried convince Mr. Trump, but felt that the president was becoming “detached from reality” and had no “interest in what the actual facts were.”

The committee has also used the hearings to tell the stories of the people who have been hurt, either in the violence of Jan. 6 or through harassment from those who believe the election was stolen.

On Tuesday, two election workers from Georgia who became the center of false conspiracy theories tearfully testified about how it has upended their lives.

Wandrea “Shaye” Moss, a former Georgia election worker, testifies Tuesday as the House select committee investigating the Jan. 6 attack on the U.S. Capitol continues to reveal its findings of a year-long investigation, at The Capitol in Washington.

The Justice Department has debunked claims that Wandrea “Shaye” Moss and her mother, Ruby Freeman, introduced suitcases of illegal ballots and committed other acts of election fraud to try to alter the outcome — a conspiracy theory pushed by Mr. Giuliani and Mr. Trump. But Ms. Moss says she no longer leaves her house and it has affected her life “in every way” after receiving violent and racist threats from Trump supporters.

In video testimony, Ms. Freeman said she no longer advertises her local business with her name on it: “Lady Ruby.”