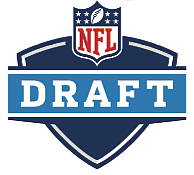 If Jahan Dotson does in the NFL what he did in college, the Washington Commanders’ first season could have fans dancing in the aisles at FedEx Field.

The smallish (by NFL standards) Dotson, a wide receiver from Penn State University, becomes the newly named Commanders’ first ever draft pick, coming in the first round and 16th overall. The draft was held in Las Vegas from April 28 through 30.

Unlike many other first round picks, Dotson did not attend the draft. Instead, he was home watching NBA game on television when he got a call from Washington Coach Ron Rivera.

After wearing No. 5 at Penn State, Dotson will don Washington jersey No. 1, underscoring the fact he is the Commanders’ first draft selection.

He arrives in D.C. with sparkling credentials. As a Penn State senior, Dotson caught 91 passes for 1,182 yards and 12 touchdowns, earning All-Big 10 honors.

In 1982, the Washington “Smurfs” — undersized Alvin Garrett, Virgil Seay and Charlie Brown — created havoc for defenders with their speed and elusiveness and delighted fans with their flair.

Dotson’s other Combine measurements were 4.43 seconds for the 40-yard dash, a 36-inch vertical leap, 10-1 in the standing long jump and 15 bench press reps at 225 pounds.

Dotson is the first wide receiver to be drafted by Washington in the first round since Rod Gardner out of Clemson University in 2001.

WhatchutalkinboutWillis? Many fans were shocked that Liberty University quarterback Malik Willis fell all the way to the third round in last week’s draft. He was finally taken with the 86th pick by the Tennessee Titans.

Most mock drafts had Willis going in the first round, even as high as second overall by Detroit. Willis was in attendance for the opening round, but watched the remainder

from a Vegas bowling alley. In Tennessee, Willis will battle Ryan Tannehill for the position.

Already, Norfolk State University defensive tackle De’Shaan Dixon has signed a free agent contract with the Jacksonville Jaguars. Dixon was All-MEAC this past season for the Spartans while racking up 54 tackles, including 12.5 for losses. 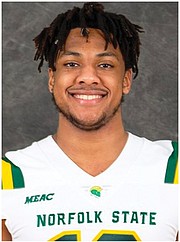 Williams went to the Kansas City Chiefs and Durant to the Los Angeles Rams, both in the fourth round. No HBCU players were selected last year.

Georgia on NFL’s mind: Incredibly, five defensive players with the University of Georgia Bulldogs were taken in the first round, led by the No. 1 overall selection, lineman Travon Walker, who was picked by Jacksonville. Four more Georgia players were called in the second and third rounds.

Close to home: University of Virginia tight end Jelani Woods was taken in the third round by the Indianapolis Colts. Woods caught 44 passes for 598 yards and eight touchdowns this past season for the Wahoos. 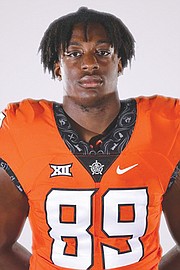