Actor Keith David challenges NSU graduates to be, do and give back 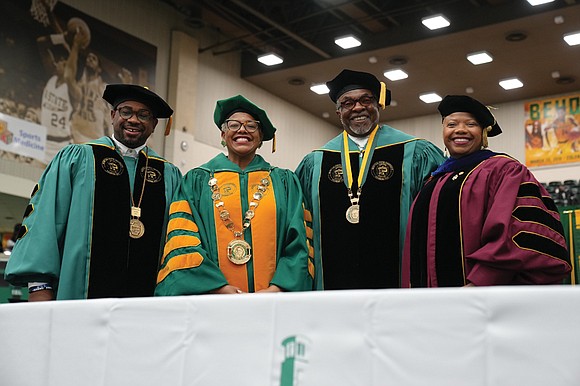 Emmy Award-winning actor Keith David reminded Norfolk State University graduates that they stand on the shoulders of giants, including their parents, grandparents, aunts, uncles and civil rights pioneers, in earning their degrees.

The classically trained award-winning actor with a rich, deep voice is starring with Zoe Saldana in the Netflix series “From Scratch.” He wowed audiences for five seasons with his starring role as Bishop James Greenleaf in the television series “Greenleaf” that started in 2016 on Oprah Winfrey’s OWN network. And he co-starred with the late Chadwick Boseman in the 2019 film “21 Bridges.”

During his remarks, Mr. David asked graduates to remember three guiding principles as they embark upon the next chapter in their life’s journey: Be humble, don’t be afraid to reinvent or reimagine yourself and cultivate community wherever you go.

He challenged the graduates to do great things for local communities.

Mr. David closed out his speech with NSU’s rallying cry: “Behold the Green and Gold!”