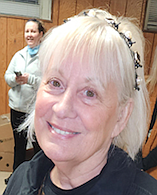 Shawnee Hansen knew she had to do something after watching a boy happily eating the meat off a turkey carcass two men had pulled from a trash can to feed him.

She launched a hunger relief campaign. She began organizing at her church and rallying other churches to get involved in a crusade to end hunger.

Working under the radar, she found locations in the city and began setting up weekly food distribution programs with help from other volunteers.

Today, the Richmond Friends of the Homeless (RFH) that Ms. Hansen created and still leads as president 36 years later quietly ranks among the largest food distribution programs in the city, with support from more than 100 churches that provide sandwiches, canned goods, blankets and other items to those in need through the program.

RFH, which raises more than $1.5 million in gifts and donated items annually, has two locations operating from 12 to 2 p.m. each of the five weekdays. With help from volunteers, Ms. Hansen supervises the distribution at Broomfield Christian Methodist Episcopal Church, 609 Richmond Highway in South Side.

Meanwhile, her daughter, Camille Hansen, who grew up with the program, has worked with a team of volunteers since 2001 to conduct daily distributions out of Greater Mount Moriah Baptist Church, 913 N. 1st St. in Gilpin Court.

Retired truck driver Scott Hayes, who lives in an apartment near Greater Mount Moriah, is among those thankful for the RFH program. “It really helps me make it through the month,” he said after picking up canned goods and other items.

Both mother and daughter largely shun public attention. But occasionally they receive recognition, such as last week when Henrico Doctors’ Hospital publicly donated $30,000 to the program, much of which will be use to provide emergency help to families in crisis.

Ms. Hansen said that includes a father of five children struggling to make ends meet while he undergoes treatment for cancer that has forced him to stop working and to give up their home.

Holidays often provide a break. On Thanksgiving, people will be directed to the Greater Richmond Convention Center where The Giving Heart will be hosting meals and giving away clothing and other items to all comers from 11 a.m. to 2 p.m., Ms. Hansen said.

Ebenezer Baptist, Sixth Mount Zion Baptist and Grace & Holy Trinity Episcopal are other churches throughout Richmond that distribute food at least one day a week during lunch.

And along with them is FeedMore, the Central Virginia food bank, as well as other private groups such as Blessing Warriors RVA, which distributes directly to the homeless.

For Ms. Hansen, the need for her group and others will remain essential as long as people struggle to get enough to eat.

“I have not wanted to do anything else,” she said. “I couldn’t do this on my own. I am grateful that so many people and organizations have gotten involved so we can continue to do what we can to make a difference.”