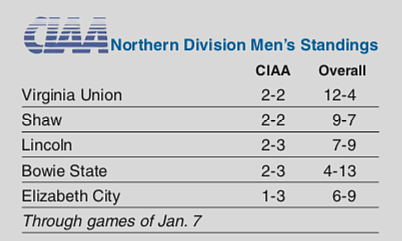 Grab a box of popcorn, find a comfy seat, and get ready for Star Wars, CIAA style.

When Virginia Union and Virginia State meet Saturday, arguably the league’s two premier ballers will be matching jump shots and dribble-drives to the hoop.

Women’s game at noon, followed by Men at 3 p.m.

That would be the Panthers’ Robert Osborne and Terrence Hunter-Whitfield for the host Trojans.

Neither school had to venture far to find their marquee attractions.

Osborne, aka “Wizard of Os,” is a powerfully built 6-foot-5, 230-pound senior from Hermitage High, a short car ride northwest of the Lombardy Street campus.

He leads the CIAA in scoring average at 19.1 and is second in rebounds with 8.5 per game, trailing only VUU teammate Raemaad Wright (9.9).

Osborne is second in the CIAA with a 54 percent shooting touch.

Hunter-Whitfield, aka “Hyphen Man,” is a 6-foot-5, 195-pound senior from Matoaca High on the outskirts of VSU’s Ettrick campus.

The son of former Trojan Ricky Whitfield, Hunter-Whitfield is second in the league in scoring (18.5) and first in steals with 2.5 per outing. Operating inside and out, he’s also among the CIAA’s elite at getting fouled (99 attempts) and making them count (70).

Hunter-Whitfield is third in CIAA shooting percentage (51 percent from field), just behind Osborne.

Forecast: Don’t be surprised if either Osborne of Hunter-Whitfield is named CIAA Player of Year in late February at the CIAA tournament in Baltimore.

Background: The Freedom Classic, honoring the life and legacy of Dr. Martin Luther King, was originally played on Sunday evenings at the Richmond Coliseum, often drawing close to 10,000 fans.

That all changed in 2018 when the rickety Leigh Street facility was padlocked by City officials.

Native Minnesotan Sommer Blakemore leads the Trojans with 16 points per game. Ny Langley, a senior from Greenville, N.C., averages 18 points and 12 boards for the Panthers.

Rematch: The ancient rivals will meet again Feb. 18 at VUU’s Barco-Stevens Hall in the regular season finale. Then it’s off to Baltimore where they could possibly meet for a third time.