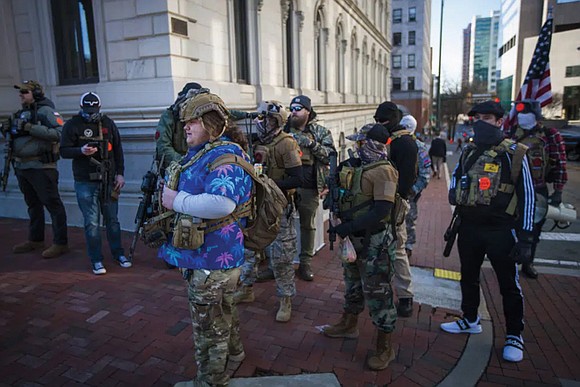 Members of the Virginia Kekoas, a Boogaloo Movement affiliated pro gun group, stand on the corner of Bank Street and N. 10th Street wearing body armor and carrying various firearms during Lobby Day on Monday at Capitol Square in Richmond. The Virginia Kekoas, a group based in the Hampton Roads area, has been active in the pro 2nd Amendment movement since 2021. AP Photo/ John C. Clark

Gun control and gun rights proponents rallied Monday at the State Capitol during an annual day of advocacy, as lawmakers from both parties offered a tempered assessment about what’s possible on the issue during this year’s legislative session.

Some Republicans and allied gun rights groups hope to roll back measures enacted in recent years when Democrats were in full control of state government, including a red flag law and a measure that allowed local governments to establish some gun-free zones. Many Democrats, responding to a series of recent high-profile school and mass shootings, have proposed a range of bills they say will improve safety, including gun-storage measures and various limits on assault-style weapons.

But with the GOP now controlling the House of Delegates and Democrats leading the Senate, some members of both parties openly acknowledge that the prospect of major legislation reaching Republican Gov. Glenn Youngkin’s desk this year is unlikely.

“You’re not going to see repeals of all of the laws that have offended us that the Democrats passed in 2020 and 2021, because while we can get them out of our House, they will die in the Senate. But you will see us standing up and stopping more progressive gun control,” GOP Del. Tim Anderson, a gun shop owner, said during a rally organized by the Virginia Citizens Defense League, a gun-rights group.

Attendance at the event was between 150 to 200, according to Capitol Police. It was far lighter than in 2020, when the promise of action by Democrats on gun-control legislation drew tens of thousands of gun-rights activists from around the country.

Among those participating Monday were members of a Black Lives Matter group from Hampton Roads and others openly carrying assault-style weapons outside of Capitol Square, where firearms are banned.

Speakers at the rally called Virginia’s red flag law an unconstitutional intrusion and made the case that the local control law has created a problematic patchwork of regulations for law-abiding gun owners.

John McGuire, one of several speakers who reminded attendees that party control of both chambers will be decided in the fall, when each legislative seat will be on the ballot.

In the afternoon, a crowd of gun control activists — slightly smaller than the first rally, according to Capitol Police — rallied at the same spot.

Democratic lawmakers who spoke argued that past years’ reforms, including the red flag law, are saving lives.

House Minority Leader Del. Don Scott invoked the signs some attendees were holding in honor of recent shooting victims — incidents that have ranged from a campus shooting at the University of Virginia that killed three football players to a school shooting earlier this month in Newport News in which police said a 6-year-old shot and wounded a teacher.