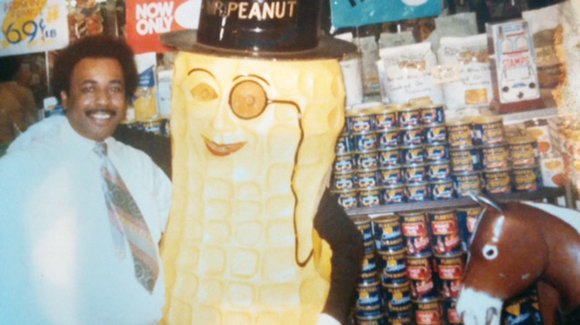 Jack J. Pollard Jr. poses in his first store, The Peanut Shoppe at 2nd and Broad streets, with the Planters’ icon, Mr. Peanut. Mr. Pollard’s son, Daryl, was wearing the costume and entertained customers in the shop.

He was known throughout the community as “The Peanut Man.”

But to those who knew and loved him best, Jack J. Pollard Jr. was much more.

The Richmond native and longtime owner of The Peanut Store, a popular community shop, always put his family first, said his wife, Phyllis.

“He loved his children and taking care of them,” she said. “He was a good provider.”

For more than four decades, Mr. Pollard’s store offered an array of treats to the Richmond area, first from a location at 2nd and Broad streets in Downtown and now in Eastern Henrico County. In addition to their trademark peanuts, he sold candy, cake, ice cream, popcorn, candy apples, coffee and soft drinks.

He also was recognized during a wake a day earlier by Frank J. Thornton, the Fairfield District representative on the Henrico Board of Supervisors.

And on the rare occasions when he was not at the store at 3605 Mechanicsville Turnpike, Mr. Pollard loved to fish, garden and collect coins.

Growing up in Richmond, Mr. Pollard attended Armstrong High School. He had a strong entrepreneurial spirit and dreamed of owning his own business, Mrs. Pollard said. Years later, he went back to night school to take business classes.

She first met her future husband when he visited family members in Church Hill.

“He knew nothing about peanuts when he began working there,” Mrs. Pollard said.

She started working at the store a few years later.

Mr. Pollard managed the store for more than a decade, then bought it from Mr. Taliaferro in 1974, making him among the first African-Americans to own a business on Broad Street in recent history. He renamed the store “The Peanut Shoppe.”

With his wife helping him run the store, Mr. Pollard was driven to succeed. He increased sales and profits at the store by nearly 50 percent in a few years.

“He was a self-made man,” Mrs. Pollard said. “He worked hard, and a lot of stuff we learned on our own. I didn’t know anything about payroll or paying taxes until we bought the store.”

In the early 1990s, the Pollards moved the store to its current location in Henrico and renamed it “The Peanut Store.”

A changing economic landscape in Richmond prompted the move, Mrs. Pollard said. “People could park in front of the store when we first had it. Then the city started making people pay to park,” she said. “We were losing business.”

For more than 15 years, Mr. Pollard also provided members of the Henrico CONNECT Program, a youth after-school program, with their first jobs. He also contributed to numerous organizations and initiatives that supported local and minority-owned businesses.

He received numerous honors and was recognized by the Astoria Beneficial Club Inc. with its Citizenship Award.

He also was a member of Trinity Lodge #44 of the Richmond Association of Masonic Lodges.

Mr. Pollard suffered from stomach cancer and worked until about a month before he died, his wife said.

She said she will continue to operate The Peanut Store with help from her daughter, grandson, Terrell, and other family members.

Additional survivors include four grandchildren, one great-grandson, a sister and brother and a host of other relatives and friends.