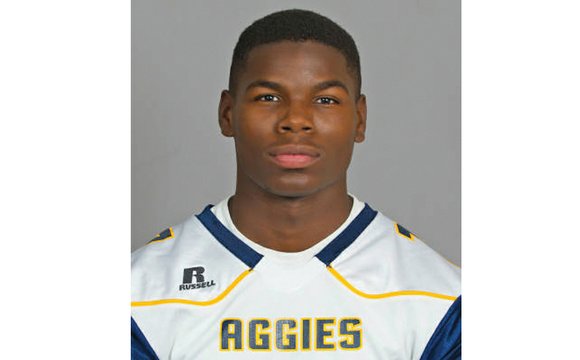 The Aggies’ explosive 5-foot-6 junior ran and ran and didn’t slow down until the Aggies had a 41-34 victory over Alcorn State University at the Georgia Dome in Atlanta.

“It was a heckuva start,” MEAC Commissioner Dennis Thomas said in a postgame news conference. “Everyone won today. All HBCU’s won today.”

The matchup of the HBCU Division I football conference victors also determined the winner of the Black College National Championship.

The event drew a crowd of 35,528 at the Georgia Dome and a national ABC-TV audience. Each conference was guaranteed $1 million.

Even before the Celebration Bowl, Cohen was a social media celebrity for his jaw-dropping ability to catch passes while doing backflips.

He was invited to ESPN’s Sports Center campus in Bristol, Conn., where he was filmed catching footballs — sometimes two at a time, one with each hand — while performing an aerial back tuck.

His amazing acrobatic stunt has gone viral on the Internet.

Just as amazing is Cohen’s ability to run with a pigskin tucked under his arm.

The Bunn, N.C., native finished the season with a school record 1,543 yards and 15 touchdowns. He also was named MEAC Offensive Player of the Year.

Alcorn State, located in Lorman, Miss., closes the season with a 9-4 record.

The Aggies suffered seven straight losing seasons before Broadway took over in 2011. Previously, he was 35-12 at Grambling State and 33-11 at North Carolina Central universities.

MEAC and SWAC champs tried previously to get together in the Pelican Bowl (1972-75) and the Heritage Bowl (1991-99), but the events lacked the financial backing of the Celebration Bowl and were discontinued.

For the Celebration Bowl to happen, both MEAC and SWAC eliminated their champions from the NCAA Division I Football Championship Subdivision (FCS).

Financially, it was a solid decision and an easy decision. The 35,000-plus turnout in Atlanta surpassed attendance for any game in the 2014 FCS tournament.

MEAC schools have fared poorly in the NCAA playoffs. The only MEAC member to win a title was Florida A&M University in 1978. No MEAC team has reached the finals since.

Last year, MEAC champ Morgan State University was a first-round loser in the NCAA playoffs at the University of Richmond.

SWAC has not participated in FCS playoffs because of its nationally televised Bayou Classic, Grambling State University vs. Southern University, on Thanksgiving weekend at the New Orleans Superdome.

The late date of the Bayou Classic has made the SWAC champion ineligible for FCS playoffs. The FCS announces its field prior to Thanksgiving.

Non-champions of MEAC and SWAC still would be eligible for FCS but none were invited this year.