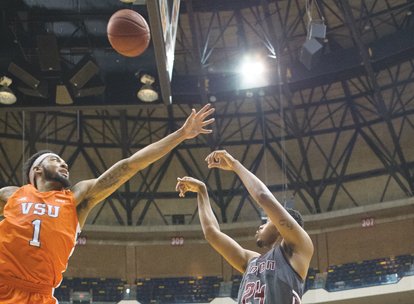 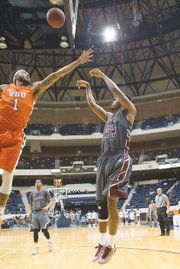 Trying to shoot inside against VSU is like trying to score in soccer against a net manned by three goalies. The Trojans led the CIAA in least points allowed (an average 64.6 per game) and lowest shooting percentage defense (38.6).

After a long lull, VSU is the second seed in the CIAA Northern Division and has high hopes for this week’s CIAA tournament in Charlotte, N.C.

VSU’s last CIAA title was in 1988. And the Trojans haven’t made it the quarterfinals since 2009.

• Little and senior guard Lamar Kearse made All-CIAA. Little was Defensive Player of the Year.

• Sophomore Moore is coming on. The former two-time All-State 4A standout from Grafton High School in Portsmouth had 15 points and six rebounds while playing the full 40 minutes in VSU’s final season game at Lincoln.

Bullard had 24 points in the regular season finale at Chowan University and tallied at least 20 points in five of the last seven outings. During that run, he was 50 for 85 from the field, 14 for 29 beyond the arc and 23 of 32 at the foul line.

Oldie but goodie: As it turns out, the CIAA’s oldest player is also the best, at least in the eyes of the coaches.

From Baltimore’s W.E.B. DuBois High School, Knox was out of school and away from organized basketball some five years before enrolling at Bowie State.

The 5-foot-11 guard is on track to receive a degree in communications this spring.

Four-year stars like WyKevin Bazemore have become rare in a league that has become top heavy with transfers.

Remember the Tigers: Saint Paul’s dropped basketball following the 2010-11 season, but at least one former Tiger is still active.