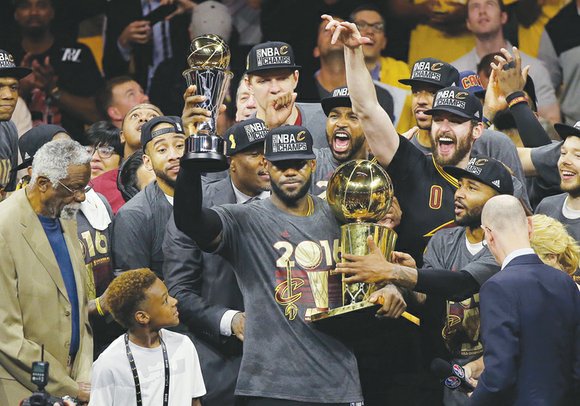 LeBron James powered the Cleveland Cavaliers to a 93-89 victory over the Golden State Warriors on Sunday in an electrifying Game 7 to complete an improbable comeback unlike any seen before and capture their first NBA championship.

With the win over the top-seeded Warriors, who celebrated a championship on Cleveland’s home court last year, the Cavaliers became the first team to rally from a 3-1 series deficit in the best-of-seven NBA Finals and win the title.

“I’ve had the goal for two years since I came back to bring a championship to the city,” said an emotional James, who returned to the Cavaliers in 2014 after a four-year stint with Miami that included a pair of NBA championships.

“I gave it everything that I had. I poured my heart, my blood, my sweat and my tears into this game.”

When the final buzzer sounded to end what was the closest game of the finals, an emotional James dropped to the floor before he was mobbed by his teammates.

James led Cleveland in the championship-clinching win with a triple-double as he recorded 27 points, 11 rebounds and 11 assists en route to being named the Most Valuable Player of the NBA Finals for a third time.

The win ends decades of heartbreak for the city of Cleveland, which had not won a professional sports championship since the 1964 Cleveland Browns of the National Football League.

For James, the win not only marks his third NBA title, but it will go down as the single greatest achievement of his storied career as it fulfills his promise to deliver a title to his home state of Ohio.

“I came back for a reason. I came back to bring a championship to our city,” said James, who was in tears as he wrapped his arms around the Larry O’Brien Championship Trophy.

“I knew what I was capable of doing. I knew what I learned in the last couple years that I was gone, and I knew I had the right ingredients and the right blueprint to help this franchise get back to a place that we’ve never been.”

A beaming James returned home Monday to a wild celebration when he stepped off the team plane in Cleveland. The mere sight of James set off loud cheers from adoring fans.

The plane touched down around 12:30 p.m. and was given a water salute of giant arches spraying over the aircraft. When the door to the plane opened and players started filing out, “We Are the Champions,” the iconic theme by British rock band Queen, blared through loud speakers.

Many of the Cavaliers hung out on top of the plane’s staircase so they could capture overhead video of the crowd before descending the steps onto the tarmac. While the players did not address the crowd, the loudest cheer was reserved for James, who appeared to take a shot at the Warriors as he disembarked. He wore a blue “Ultimate Warrior” T-shirt while holding the glittering NBA championship trophy over his head.