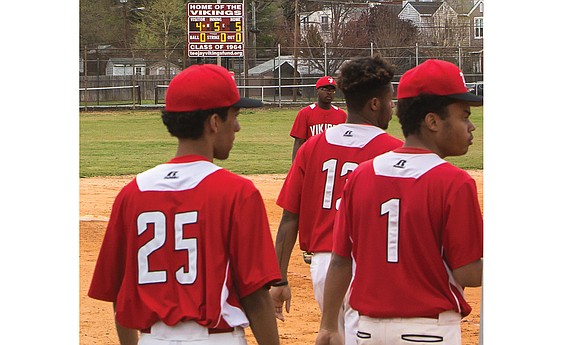 Thomas Jefferson High School baseball players enjoy the new electronic scoreboard at the West End school’s field thanks to the Thomas Jefferson Class of 1964 and the TJ Viking Fund stepping up to the plate with fundraising efforts. Photo by James Haskins

First, the West End school has its first-ever electronic scoreboard.

Just as encouraging are signs that the Vikings have some sluggers capable of lighting it up.

But he adds a warning: “We’re so young.”

With a lineup brimming with underclassmen — including two freshmen — the Vikings entered spring break with a 3-1 record, an encouraging mark above .500.

The new scoreboard was unveiled April 3 and the Vikings responded with a 5-4, 6-5 doubleheader sweep of visiting Armstrong High School.

“It was a perfect day,” said Coach Henry.

Thomas Jefferson’s ace pitchers also appear to be among the top hitters.

He feels with Woolfolk and Graham toeing the rubber, his team can be highly competitive in the state 3A classification.

Woolfolk ranks among the area’s most versatile and talented athletes. He also served as Thomas Jefferson’s football kicker, was a second-team, All-Conference 26 basketball guard and is a top threat in soccer.

Woolfolk and Graham both play shortstop when not pitching, and they provide plenty of gusto swinging the bat.

The Thomas Jefferson Class of 1964, in conjunction with the TJ Viking Fund, raised money for the project and Richmond Public Schools took care of the electrical wiring.

“Our next project is dugouts. That’s for next year,” he said.

Facelift coming: Also in the works is a plan to dramatically upgrade the surface of the football-soccer field.

“It needs a lot of work,” said Holt. “Basically, we’re competing in the 21st century with facilities designed for 1930.”

Searching for a more competitive balance, Holt has restructured the football schedule in recent years.

Gone are the likes of 5A powerhouses Mills Godwin, Douglas Freeman and Hermitage high schools of Henrico.

“There’s tough and then there’s unbeatable,’ said Holt. “We want our kids to have a chance.”