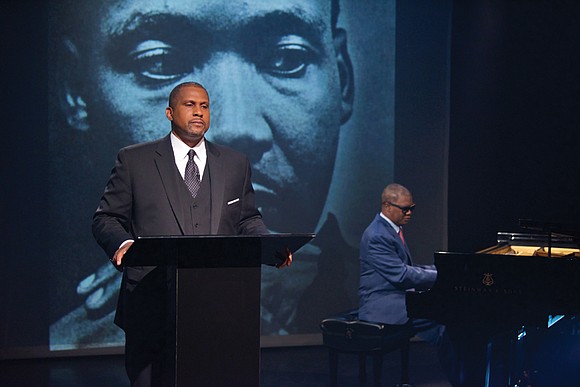 PBS broadcaster and author Tavis Smiley, left, and renowned jazz pianist Marcus Roberts rehearse for the multimedia stage production, “Death of a King: A Live Theatrical Experience,” that will be in Richmond on March 22. Earl E. Gibson/The Smiley Group

“Death of a King: A Live Theatrical Experience” will be presented March 22 at the Carpenter Theatre at Dominion Arts Center in Downtown. Combining the prose of Mr. Smiley, music by jazz pianist Marcus Roberts and three massive screens showing rarely seen photos and video footage, the show will highlight the impact Dr. King had on American people and across the globe.

It is based on Mr. Smiley’s best-selling book, “Death of a King: The Real Story of Dr. Martin Luther King Jr.’s Final Year,” and will center on how Dr. King summoned the courage and conviction to go forward with a message of peace despite difficulties and divisions and a decline in his own popularity.

“We get to know who we are in the dark, desolate days of our lives,” Mr. Smiley said in a recent Free Press telephone interview. “We learn who is with us.

“The same is true for Martin Luther King,” he continued. “If you only know him at his apex, if you only see him at the mountaintop but never experience him in the valley, then you don’t know who Martin King really is.”

America’s collective memory of Dr. King is tightly wrapped in the fabric of his “I Have a Dream” speech delivered at the 1963 March on Washington at the Lincoln Monument. That was Dr. King’s apex, Mr. Smiley said, with his message of freedom, equality and justice galvanizing people. 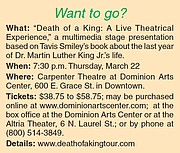 That message has spread around the world, with Dr. King as a beacon for generations of people.

But “in the last years of his life, Martin was trudging and slugging his way through a valley,” Mr. Smiley said. “He had fallen off the list of the most admired Americans. To put this in context, Martin’s popularity polls were as low as Donald Trump’s.”

Dr. King had become “more radical in what he was willing to say,” Mr. Smiley said. While he had provided counsel to President Lyndon B. Johnson that helped win major civil rights legislation, Dr. King came out against the Vietnam War, a conflict that was dividing the nation.

In an April 1967 speech at New York’s Riverside Church called, “Beyond Vietnam,” Dr. King talked about how he was challenged by anti-war protesters who questioned how he could support nonviolence to bring about social change when the American government was using violence to bring about changes it wanted in Vietnam.

It was a pivotal moment for Dr. King, Mr. Smiley said.

“He was telling the truth about America — straight, no chaser,” Mr. Smiley said. “The truth he was telling was so subversive that Americans couldn’t handle it … They turned on Martin and he tried to endure a living hell.

“This was Dr. King at his best, at his most courageous, his conviction, his commitment, his character,” he said, “a truth as timely today as it was 50 years ago.”

Kenny Leon, a Tony Award-winning director whose credits include the 2014 revival of “A Raisin in the Sun” starring Denzel Washington, served as creative director of the show.

Cortina, the company that designed and built exhibits for the Smithsonian’s National Museum of African American History and Culture, produced the show’s visual presentation.

“What they have done will absolutely blow you away,” Mr. Smiley said.