International player making a difference for the Rams 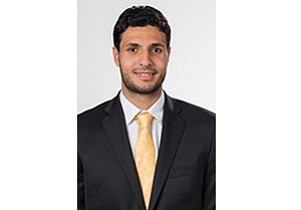 Considering its notable track record with global recruiting, the “U” in VCU might stand for “Universal.”

Egyptian native Ahmed Hamdy-Mohamed is the current international athlete making a difference for the Rams.

The 6-foot-9, 240-pound senior from Egypt’s port city of Alexandria has made his mark as a scorer, rebounder and inside defender coming off the bench for Virginia Commonwealth University Coach Will Wade.

In six games from Jan. 11 to Feb. 1, Hamdy-Mohamed  averaged 10 points and seven rebounds while hitting 19 of 33 mostly power inside shots (58 percent) from the field.

He narrowly missed a third double-double with 12 points and eight rebounds in the Rams’ pivotal 73-68 victory Jan. 27 over the University of Dayton.

The Rams improved to 18-5 overall and a league-leading 8-2 in the Atlantic 10 Conference following VCU’s 88-77 overtime win at St. Bonaventure University on Saturday, Feb. 4.

Hamdy-Mohamed transferred to VCU last year from Lee College, a two-year school in Baytown, Texas. He is among the few Egyptians playing NCAA Division I basketball. Another Egyptian of note is 7-foot Anas Mahmoud, a leading shot blocker at University of Louisville.

The lone Egyptian to play in the NBA was Alaa Abdelnaby (1990-1994) following a collegiate career at Duke University.

Here is a review of some international athletes who left their mark on VCU:

• Martin Henlan (from England, 1987-1990): The 6-foot-10 Brit was a two-year starter under Coach Mike Pollio; set the rebounding record at the Hoosier Classic.

• Yann Bonato (France, 1991): Never clicked with Coach Sonny Smith, but went on to play for France in the 2000 Olympics in Sydney, Australia.

• Eugene Kissourine (Russia, 1992-1993): Averaged six points and six rebounds as a junior but, mysteriously, didn’t return for his senior season.

• Reggie Okosa (Nigeria, 1998-2000): Had two solid seasons as a Ram before transferring to LaSalle University.

• Wil Fameni (Cameroon, 2006-2008): After transferring from Arizona State, he was the Rams’ center on the team that upset Duke University in the 2007 NCAAs under Coach Anthony Grant.

• Franck Ndongo (Cameroon, 2006-2009): During his career with the Rams, he arranged for sister Christelle to come to Richmond; Christelle  played at St. Catherine’s under ex-Ram great Edmund Sherod.

• Kirill Pishchalnikov (Russia, 2007-2010): Under Coach Shaka Smart, he helped the Rams to two CAA titles and played in the NCAAs against UCLA.