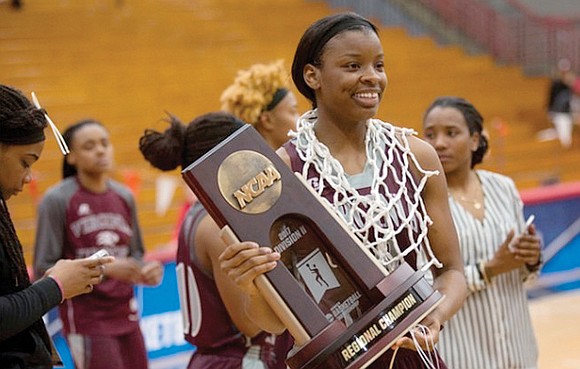 The next stop for Coach Gilbert’s Lady Panthers is Columbus, Ohio, site of the NCAA Division II Elite Eight.

Sixth-seeded VUU will play No. 3 Columbus State University of Columbus, Ga., in a quarterfinal game at noon Tuesday, March 21, at Ohio Dominican University.

Earlier, the Lady Panthers ousted Wheeling Jesuit University of West Virginia 66-58 in the Atlantic Region quarterfinals and Indiana University of Pennsylvania 62-58 in the regional semifinals to advance to the finals.

Coach Gilbert starred as a player — leading Division II in scoring — and later became a successful head coach at Oberlin College of Ohio. Her husband, Jonathan Walker, is from Cleveland.

The Elite Eight semifinals will be Wednesday, March 22, with the championship game set for Friday, March 24.

The Lady Panthers won the regional title without leading scorer Brittany Jackson. The junior guard was benched because of a disciplinary infraction. The university hasn’t announced whether Jackson, a 5-foot-9 multidimensional guard, will be reinstated for the Elite Eight.

The Lady Panthers won the NCAA Division II title in 1983 and was runner-up in 1984. Last year, the team won the Atlantic Region title at Barco-Stevens Hall on the VUU campus before losing in the national quarterfinals in Sioux Falls, S.D.