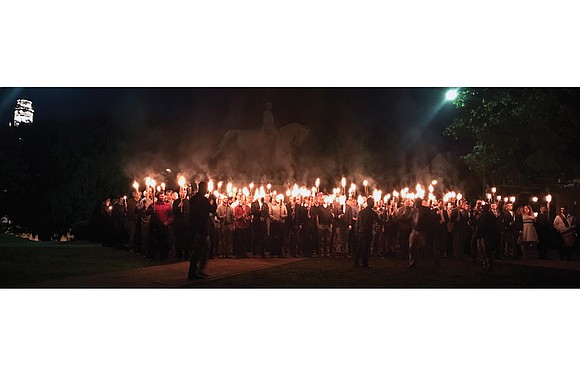 Protests reminiscent of Ku Klux Klan rallies are rattling Charlottesville over the city’s plans to remove a statue of Confederate Gen. Robert E. Lee from a park in downtown.

A group carrying torches and led by white nationalist Richard Spencer held a demonstration around the statue last Saturday night to protest its removal.

The protest was swiftly condemned by city leaders, who said it evoked images of the racist KKK.

“This event involving torches at night in Lee Park was either profoundly ignorant or was designed to instill fear in our minority populations in a way that harkens back to the days of the KKK,” Charlottesville Mayor Mike Signer said in a statement. “I want everyone to know this: We reject this intimidation ... such intolerance is not welcome here.”

That demonstration was followed by a candlelight counterprotest Sunday night, where speakers preached tolerance and protesters hung a banner on the statue’s base that stated, “Black Lives Matter” and “Fk White Supremacy.”

Police made three arrests after several right wing protesters showed up and a scuffle broke out. A police officer was injured when an object thrown from the crowd struck him in the head.

The tensions have made this historic city, home of President Thomas Jefferson’s mountaintop home, Monticello, and the University of Virginia, the latest Southern battleground over the contested removal of Confederate monuments — symbols of the Civil War that represent heritage to some, hate to others.

At least 60 publicly funded symbols of the Confederacy have been removed or renamed since the 2015 massacre of nine black parishioners in a Charleston, S.C., church by a self-described white supremacist, according to the Southern Poverty Law Center.

Amid protests last week, workers in New Orleans removed the second of four monuments to vanquished Confederates, the latest one a statue of Confederate President Jefferson Davis.

The debate over the Lee statue in Charlottesville has reached Virginia’s gubernatorial race, where several Republican candidates have called for it to remain. One, GOP candidate Corey Stewart, who is chairman of the Prince William County Board of Supervisors, chose the Lee statue on Monument Avenue in Richmond to hold a television interview. In a separate interview earlier in the week, he said it’s time for white people to “stop apologizing.”

Meanwhile, Democratic gubernatorial candidate Tom Perriello, a native of Charlottesville, supports the statue’s removal and wound up in a Twitter battle with the racist Mr. Spencer following last Saturday’s rally.

“Actually, you lost. In 1865,” Mr. Perriello replied in a tweet, referencing the year the Civil War ended. “150 years later, you’re still not over it.”

“We’re not re-fighting the Civil War. We’re fighting for a White future,” Mr. Spencer responded via a tweet. “We’ll easily defeat weaklings like yourself.”

The Charlottesville City Council voted in February to remove the bronze statue of Gen. Lee, which was installed almost a century ago and depicts the Confederate in uniform astride a horse. The city also voted to rename Lee Park, where the statue stands, and another nearby park named for Confederate Gen. Thomas “Stonewall” Jackson.

A group of residents have sued the city to keep the Lee statue in place. A judge has agreed to block its removal for at least six months while the litigation proceeds.