‘We are The Wilsons!’ 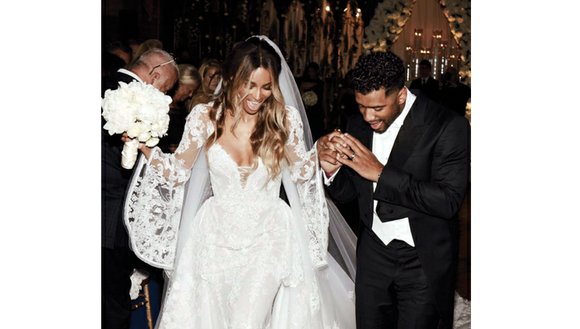 Singer Ciara has one-two stepped down the aisle with NFL player Russell Wilson.

The couple both posted the same photo Wednesday on Twitter and Instagram showing Ciara in a wedding gown and the Richmond native in a tuxedo with the caption, “We are The Wilsons!”

A representative for Ciara confirmed the marriage and said the wedding took place at the Peckforton Castle in Cheshire, England.

No more details about were provided.

However, TMZ reported that all cell phones were collected before family and friends entered the castle outside Liverpool to ensure privacy. Jennifer Hudson and Kelly Rowland were among the guests.

TMZ also reported that Ciara and about a dozen of her BFFs, including tennis star Serena Williams, met in Las Vegas two weeks ago at the swanky Wynn Las Vegas hotel on The Strip.

The weekend bash —apparently Ciara’s bachelorette party — including dancing at Intrigue nightclub, hanging out by the pool and attending the Cirque du Soleil’s aquatic show, “Le Rêve – The Dream” at the Wynn.

Ciara, 30, and Mr. Wilson, 27, announced their engagement in March.

This is Mr. Wilson’s second marriage. Ciara’s son, Future Zahir, turned 2 in May.