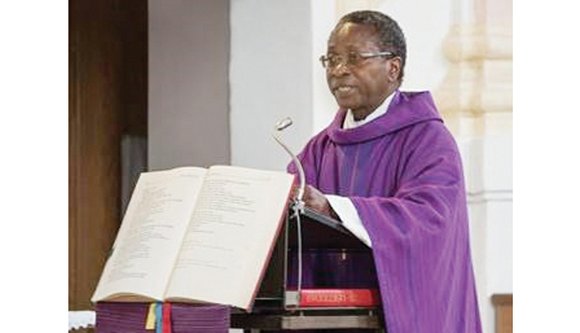 The two resigned their posts but it didn’t end there for the Catholic priest of Congolese origin. The Rev. Olivier Ndjimbi-Tshiende stepped down this week after receiving death threats and racist abuse from anonymous sources.

Rev. Ndjimbi-Tshiende, 66, told shocked parishioners of his decision during a church service Sunday in Zorneding, a small town near the southern city of Munich.

“You cannot imagine what I have experienced here,” he told a Munich newspaper. “The pressure is too great and I am tired.”

The dispute erupted after Sylvia Bohrer, the local chair of her party, described the refugees as “invaders.” Then Ms. Bohrer’s deputy described the priest as “unser Neger” — which translates as “our nigger” or “our Negro.” Both Ms. Bohrer and her deputy have since resigned.

Hate speech in Germany is a punishable offense and police are now investigating a possible crime against Rev. Ndjimbi-Tshiende.

A different scenario, meanwhile, was playing out in London where Seada Fekadu, an Eritrean refugee was commended for counseling refugees by the group Women on the Move.

Ms. Fekadu was 16 when she escaped from Eritrea after her father was arrested for his political activities. After taking a boat to Djibouti, a plane to Paris and then smuggled in the back of a truck to London’s Waterloo Railway Station, she was granted refugee status by the Home Office after three months.

Since then, Ms. Fekadu has built a new life, studying for a degree in business and technology. She has offers from four universities to study biomedical science. She also volunteers with Young Roots, a charity that helps young refugees.

“Young Roots helped me gain confidence. Now it’s my turn to help others,” she said. “I’ve been in their situation so I can understand them and I’m happy to help.”

In recognition of her work, Ms. Fekadu will receive an award recognizing women with a migrant or refugee background who provide inspiring leadership. The awards are organized by the United Nations and Migrants Organise.