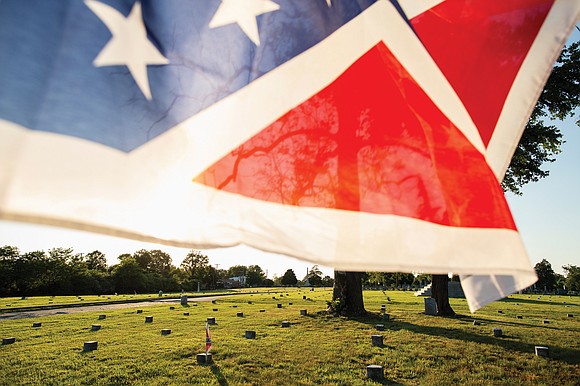 On most Saturdays since 2013, volunteers have met at East End Cemetery in Henrico County to hack away at the vines and weeds that have choked gravesites there for decades.

By now, they’ve hauled out tons of brush and more than 1,500 tires dumped illegally at this historic African-American burial ground that was founded in 1897.

One enters a different world by crossing Stony Run Parkway and into Oakwood Cemetery’s Confederate section. The grass is neatly trimmed. Headstones are clean and, for the most part, upright. There are no pockets of garbage.

There’s a plaque at the gate to the Confederate area informing visitors that a 1930 act of the Virginia General Assembly set up a perpetual care fund for the Confederate section of this city-owned cemetery. The fund, a lump sum of $30,000, doesn’t sound so generous until one realizes that it was the equivalent of $440,000 today.

The Virginia General Assembly set up a $30,000 perpetual care fund in 1930 to care for the Confederate gravesites at Oakwood Cemetery.

Records show that since 1902, the Commonwealth of Virginia has paid more than $9 million, in today’s dollars, to associations and neo-Confederate organizations to maintain Confederate graves and cemeteries.

In effect, Jim Crow has left his mark on each of these burial grounds. Its racist policies and practices allowed white officeholders to funnel tax dollars paid by local citizens, black, white and all races, to support Oakwood’s Confederate section and other white burial grounds, while East End, Evergreen and other historic African-American cemeteries were starved for funds, the vital history they contained literally consumed by nature.

Unfortunately, this is not ancient history. For more than 100 years, the Commonwealth of Virginia and other former slave states have been subsidizing not only Confederate cemeteries, but many of the hundreds of Confederate monuments and “heritage” sites that mark public space across the South.

This financial aid, much of it channeled through neo-Confederate organizations such as the United Daughters of the Confederacy and the Sons of Confederate Veterans was approved by the same all-white — or white-dominated — legislatures that engineered the theft of black voting rights in the late 19th and early 20th centuries.

The money continues to flow because some of these annual allocations are still on the books in 2019. Meanwhile, many African-American sites of memory, such as East End and Evergreen cemeteries, subsist mostly on private donations and volunteer labor.

Even among Southern states, Virginia has maintained a particularly strong commitment to lionizing the losing side of the Civil War. These statues and tributes to the Lost Cause promote a false history of the conflict, which asserts that states’ rights and tariffs — and not a struggle over slavery — were at the heart of the bloody war. Moreover, according to that toxic ideology, African-Americans were not simply naturally suited and divinely assigned to enslavement, but they thrived under it and were happy.

“They are an affectionate, trustworthy race. If the institution of slavery had been left to work itself out under the influence of Christianity and civilization, the unjust and cruel incidents would have been eliminated,” he told the gathering.

Also in 1902, the Virginia General Assembly codified the allocation of funds to memorial associations that maintained Confederate graves and cemeteries. Such payments had been made on an ad hoc basis since the late 1800s.

Those payments continue through the present. The General Assembly pledged $83,570 to the United Daughters of the Confederacy for 2019, according to data from the state Department of Historic Resources. The UDC will in turn dispense these funds to heritage associations across the state that tend Confederate graves in private and public cemeteries. More than $11,000 will go to a Sons of Confederate Veterans chapter to maintain Oakwood Cemetery’s already pristine Confederate section.

There is some good news. Positive steps are being taken change the narrative presented at some taxpayer-supported Confederate sites. Robert E. Lee’s birthplace, Stratford Hall in Westmoreland County, currently is overhauling its historic interpretation to deal responsibly and honestly with enslavement — as well as black resilience and resistance.

Earlier this year, Congressman A. Donald McEachin of Henrico County introduced the African-American Burial Grounds Network Act, co-sponsored by Democratic Rep. Alma S. Adams of North Carolina, which would establish “a voluntary national network of historic African-American burial grounds through the National Park Service” and “provide technical assistance and make grants available to research, survey, identify, record and aid in the preservation of sites within the network.”

The photo shows the condition of the gravesite of noted newspaperman John Mitchell Jr. in May 2018.

The General Assembly also recently took a small step toward recognizing the historical significance and need to preserve black burial grounds. In 2017, it passed the Historical African-American Cemeteries and Graves Act providing grants for maintenance of historical burial grounds, which then-Gov. Terry McAuliffe signed into law.

In this year’s legislative session, a bill that provides money to care for more than 8,000 graves at 12 African-American cemeteries, including more than 6,900 burial sites in Evergreen and East End cemeteries, passed the Senate and sailed through the House of Delegates. Among the first recipients of these funds — $10,500 — is the Enrichmond Foundation, which acquired Evergreen Cemetery with the financial and political backing of state agencies in 2017.

But this modest funding for these sacred and historic sites does not come close to achieving parity with the millions of dollars the state has spent on Confederate graves over more than a century.

Rather than eliminating a special status for Confederate graves, a proposal floated in the past by legislators such as Delegates Delores L. McQuinn of Richmond and Jeion Ward of Hampton, the legislature created a special provision for black cemeteries — still separate; still unequal.

Brian Palmer is a Richmond-based visual journalist and a reporter with Type Investigations. He is also a member of the Friends of East End Cemetery. For more on his investigation of Confederate memorials with Seth Freed Wessler for Smithsonian Magazine and Type Investigations, see “The Costs of the Confederacy.”