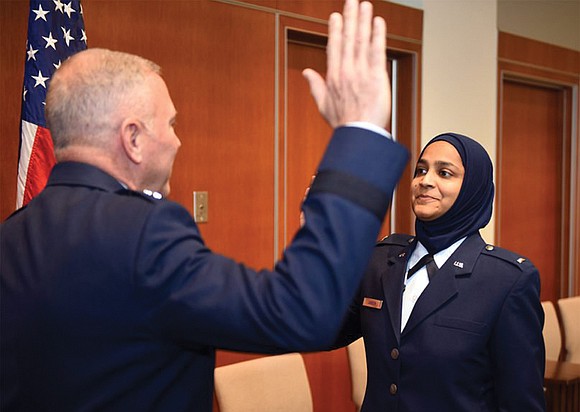 The U.S. Air Force commissioned its first Muslim woman chaplain candidate last month, marking the first time the U.S. military will have a female chaplain of the Islamic faith.

Saleha Jabeen became a second lieutenant in a December ceremony at the Catholic Theological Union in Chicago.

“The fact is America is a place where the Constitution guarantees your freedom to embrace or abstain from religious ideals, and the Chaplain Corps, which Jabeen just entered, exists to ensure every Airman has a religious freedom advocate. This is a big day not just for Muslims, but for persons of all faiths,” said Maj. Gen. Steven Schaick, Air Force chief of chaplains, in a statement published on the Air Force’s website on Jan. 10.

“I could not be more proud of our Air Force for being willing to commission and embrace the first female Imam in the Department of Defense.”

2nd Lt. Jabeen’s path to the chaplaincy included graduating from North Park University, an evangelical Christian school in Chicago, in 2009, and the Catholic theological school, where she was the first Muslim woman chosen by fellow students as valedictorian for their 2014 class, according to a bio she provided to Religion News Service.

She served in the U.S. Army Reserve from 2016 to 2018, acting as a lay representative for the Islamic faith when a Muslim chaplain was not available.

2nd Lt. Jabeen, who was born and raised in India, said she expects to take officer training this summer at Maxwell Air Force Base in Montgomery, Ala.