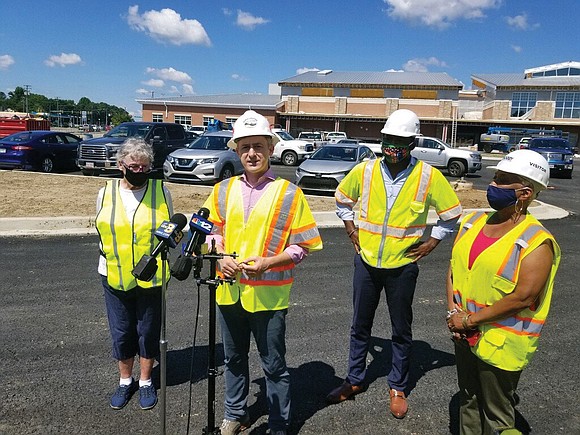 As the city’s second Confederate monument was being taken down last week, Mayor Levar M. Stoney, schools Superintendent Jason Kamras, School Board Chair Linda Owen and Vice Chair Cheryl Burke toured one of three educational monuments under construction that are dedicated to the future of city students.

The group toured River City Middle School, the new $64.5 million, 1,500-student capacity school being built in the 6300 block of Hull Street Road at the site of the former Elkhardt Middle School in South Side.

After the tour on July 2, the mayor and school district officials commented on the importance of constructing 21st century schools that prepare the next generation.

“This is the sort of monument moving forward that we want to erect to our children here in the city of Richmond,” said Mayor Stoney. “This is a testament to what we can do when we all work together.”

When students walk into River City Middle School, “they will have the feeling of love,” Mr. Kamras said, reflecting on Richmond Public Schools’ motto, “Teach with love. Lead with love.”

“This is the kind of high-tech, 21st century school that speaks to future performance and excellence of our students,” he said.

Ms. Owen and Ms. Burke were impressed as they talked about what students will be able to accomplish in the three new schools.

“This school is magnificent,” Ms. Owen enthusiastically proclaimed. “It is built like a high school, with a great media center, auxiliary gyms and amazing kitchens in each wing, three different science labs with lots of light and color. This makes me very happy,” she said.

The middle school is located in the 9th District that Ms. Owen represents on the board.

“We want our children to be successful,” Ms. Burke said.

“They desire well-equipped buildings with state-of-the-art resources. This is absolutely awesome,” she said of River City Middle School.

Henry L. Marsh Elementary is located in the 7th District, which Ms. Burke represents on the board.

Asked if RPS students will be taught the importance of the monuments’ removal, as well as their meaning and history in Virginia and the nation, Mr. Kamras was quick to reply.

“We are absolutely going to teach the ‘why’ these monuments were taken down as part of the district’s real Richmond history course,” the superintendent said. “Equity has always been the core responsibility of RPS,” Mr. Kamras said.

Mr. Kamras said community leaders, historians and clergy have been working for more than a year on a Richmond history course. The course, he said, will launch in the fall, taught either virtually or in person.

“We are going to tell the good, the bad and the ugly of the history of Richmond,” he said. Our students and staff will know the city’s story and why we are where we are today.”