‘We’re not giving up’ 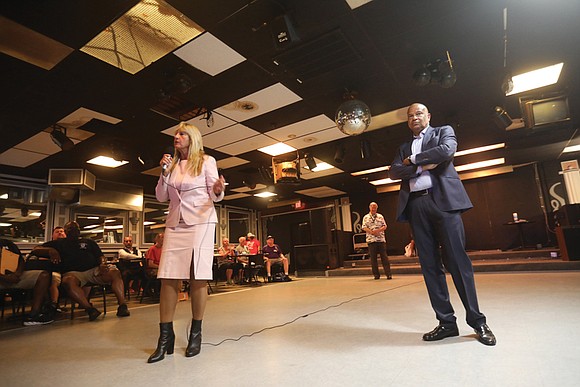 Alfred Liggins, CEO of Urban One, right, listens during a meeting hosted by 8th District Councilwoman Reva Trammell, left, at The Satellite Restaurant & Lounge on Aug. 4. Urban One wants the City of Richmond to focus on a casino referendum for 2023. Photo by Regina H. Boone

Forget about a second vote on a casino-resort in November.

Richmond has bowed to pressure from a General Assembly that now appears to favor Petersburg as Central Virginia’s casino host city and is giving up holding a new referendum in the fall.

Mr. Liggins said at the Aug. 4 meeting at the Satellite Restaurant in South Side that rather than voting this year, the second voter referendum is now envisioned to be held in November 2023.

“We’re not giving up,” said Cathy Hughes, founder and board chair of Urban One and Mr. Liggins’ mother.

During a meeting hosted by an 8th District Councilwoman Reva Trammell at The Satellite Restaurant & Lounge on Aug. 4, Cathy Hughes, chair and founder of Urban One, tells attendees why she and her son Alfred Liggins, Urban One’s CEO, want the City of Richmond to focus on a casino referendum for 2023.

Mayor Levar M. Stoney and City Council initially had pushed to have a second vote, even securing a court order last spring to put the issue again before the voters on the November ballot

Political strategist Paul Goldman, who led the opposition’s successful campaign last year, but supports having a second vote this year, said the decision will cost “Richmond its poll position” in the race for a casino.

Instead of voting ahead of Petersburg, the delay until 2023 is likely to mean voters in both cities would be casting casino ballots, he said, with the Cockade City favored if the city had a casino plan ready to present to the voters.

Mr. Goldman unsuccessfully lobbied the council to put an advisory referendum on the ballot for the upcoming general election that would require any tax dollars derived from a future casino, if one were built, to be devoted to modernizing city school buildings. The council declined to override City Attorney Haskell C. Brown III, who advised against it.

Richmond’s opportunity to hold a second vote this year began to melt after the General Assembly approved language in the new 2022-23 state budget barring a second referendum this year and also barring the casino-regulating Virginia Lottery from considering a license application for 12 months if Richmond voters did approve the casino project in a second vote.

The language was put in place to allow the Joint LegislativeAudit Review Commission time to report on whether Petersburg would be an apt location for a casino.

Gov. Glenn A. Youngkin declined to intervene on Richmond’s behalf and propose removal of the language, and instead signed the budget into law with the language intact.

Just before Mr. Liggins’ public announcement on Aug. 4, state Sen. Joseph D. Morrissey, who represents both Richmond and Petersburg, and Petersburg Delegate Kimberly A. Taylor, sent a letter to Gov. Youngkin requesting that he direct Attorney General Jason S. Miyares to take legal action to ensure Richmond could not vote this November.

Mr. Liggins said that letter was the final straw. He said any litigation to defend Richmond’s right to vote this year would have been expensive and likely would not be completed before early voting began in mid-September.