A 6-foot-4 guard known for his signature bank shot, Mr. Jones was the first round, eighth overall pick by Boston in 1957. 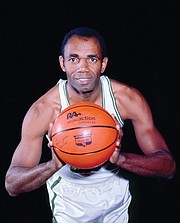 Teaming with such greats as Bill Russell, Bob Cousy, K.C. Jones (no relation), John Havlicek, Tom Heinsohn and Satch Sanders, Mr. Jones was part of 10 NBA championship teams between 1959 and 1969.

He was a five-time NBA All-Star and was inducted into the Naismith Memorial Basketball Hall of Fame in 1984. He was named to the NBA’s 25th, 50th and 75th Anniversary All-Time Teams.

That was enough for famed Celtics Coach Red Auerbach to make him a first round draft choice—a rare honor for an HBCU athlete at the time.

Few Celtics fans had ever heard of North Carolina College at Durham, but they quickly grew to know and cheer Sam Jones.

If Mr. Jones wasn’t the greatest HBCU basketball star of all time, he was close.

In looking for a “best ever” tie-breaker, Sam Jones won 10 NBA championships, and that’s hard to top.